I almost missed Charles Moore's interesting review of a startling new biography about Edward Heath in yesterday's Sunday Telegraph. Had it not been for the fact that I was looking up the latest footy scores (7-0 to Portugal against the North Koreans, eh? See article below) I would never have seen it and missed a treat. The book is by Philip Ziegler who I imagine is the same author who in the late 1960s wrote one of my favourite books about the Black Death. Hang on, I'll check.

Moore gives some examples from what we are to believe is a whole litany of character flaws associated with Heath. I'd always wondered why my grandmother threw a (full) cup of tea at her television when his face appeared on it 30-plus years ago. Well, perhaps here's why:

Although he faithfully sets out the virtues – honesty, courage and determination – Ziegler gives a catalogue of blemishes. Here is a tiny selection of the numerous examples. At the Oxford Union, Heath declared that, "Women have no original contribution to make to our debates." He did not answer the plaintive letters of Kay Raven, the only person who ever came close to being his girlfriend, but when she finally gave him up and married someone else, Heath was angry with her. In sharp contrast to the young Margaret Roberts (soon to be Thatcher), who stood, in the 1950 general election, in the seat that adjoined Heath's, young Ted took his constituency workers for granted and treated them like children.

Heath grabbed perks and luxuries, scoffing chocolates by the boxful, demanding money for his travels from commercial interests and taking no trouble about the comfort of those who had to travel with him. When, as Leader of the Opposition, he took up sailing, his yacht Morning Cloud cost £20,000 a year to run. Various businessmen paid for the yacht, but Heath was not worried by the danger of a quid pro quo: he got around the problem by never thanking them. "Gratitude," as Ziegler puts it, "was not one of his more marked characteristics."

At this point we realise that Heath must have been an absolute nightmare to work with, for, near or under. It's also pretty clear that no matter how smart and even gifted he might have been, and I am unconvinced that genuinely intelligent people are unpleasant to those who work for them (Maggie wasn't), he had not clue-one about motivating people and would not have survived for long beyond his cloistered, soft-furnished world. And yet it goes on. More is yet revealed about the man who took us in to the EEC on the back of a pack of lies, out-Laboured Labour with the NUM and behaved as though he and only he understood human nature, when quite the opposite was patently the case. As Moore goes on:

He had a huge sense of entitlement...[but]...as Ziegler points out, he had no gift for exposition, because he was utterly uninterested in what others thought. This is why people felt cheated, and still do to this day, about the terms on which Heath took Britain into the EEC. He never took the British people into his confidence.

Once, when attacking free-market attitudes, Heath said: "What distinguishes man from the animals is his desire and his ability to control and shape his environment." Is that really the key distinction? This arid, managerial philosophy was reductive of human freedom and possibility. It also ensured that the country was very badly run. The famous U-turn over economic policy and state support for industry, the rigidities of the Industrial Relations Act, the hopelessness of trying to control prices and incomes, the defeat by the miners were all related to the beliefs and character of the man who presided over these disasters.

Moore then goes on to say that Ziegler's book provides a first class illustration of Heath's character and its flaws and his subsequent failures, but the historian does not provide any political explanations, so Moore then offers one of his own which resonates with another, recently departed, deeply flawed but clever prime minster of Britain. Moore says, of Heath, tellingly:

Heath's future opponent, Keith Joseph, persuaded Margaret Thatcher to vote for him as leader in 1965 on the grounds that "Ted has a passion to get Britain right". Perhaps he did. He was certainly brave in pursuing what he believed in. But he got Britain wrong.

I can't help thinking he had Gordon Brown in mind when he wrote that. But then it struck me: of course he didn't. There's no comparison. Heath might have been a selfish, puffed-up, interventionist Tory Europhile with a talent for music and boats, but he was no liar (not even on Europe - I suspect he really believed them) and he knew how to go when the time came. He also stayed in Parliament till nearly his dying day, maybe to spite Margaret Thatcher ("that evil woman") or - more likely in my view - because he liked being an MP and he was good at it. But where's Gordon? The contrasts with Brown are there for all to see, and I've just touched on one or two of them. 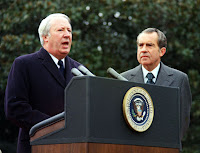 The point is, if Heath was a terrible Prime Minister (and I'm certainly not alone in feeling he was), then Brown was a catastrophe (ditto). If you were forced to choose between the lesser of these two weevils, my guess is that you'd plump for Heath, though through gritted teeth, naturally. I would.