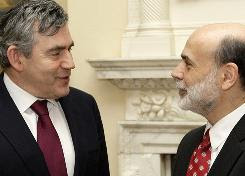 One of these two knows what he's doing

Having flailed around in my last blogpost banging on about some sort of 'new phenomenon' where there wasn't one, really, (I'll leave it for others to decide, but I reckon it was not my best effort to be brutally honest), it comes as something of a relief to see the Spectator doing what it does best and putting the boot in to old "saved the world" Brown himself. And all they had to do was flag up Bernanke's testimony to a Senate hearing about Brown's ultra-useless tri-partite banking regulation system. Here's what the report says:

Gordon Brown’s much heralded tripartite regulatory system failed the first time it was faced with a financial crisis, proof that taking away regulatory powers from the Bank of England was a massive mistake. Now, Ben Bernanke — who is trying to secure a second term as Fed Chairman and keep the Fed’s regulatory powers intact — is citing the Brown model as what not to do, telling the Senate banking committee:

"[O]ver the past few years the government of Britain removed from the Bank of England most of its supervisory authorities. When the crisis hit - for example when the Northern Rock bank came under stress - the Bank of England was completely in the dark and unable to deal effectively with what turned out to be a destructive run and a major problem for the British economy.”

As Paul Waugh points out, George Osborne and his team are rather pleased with this effective endorsement of their position by the Fed Chairman. Bernanke’s quote does rather show that Brown isn’t leading the world in quite the way that he likes to claim.

Very gently put by James Forsyth. In reality, what Bernanke is saying here is that Brown himself - personally - through his moronic regulatory mishmash, directly caused - not contributed to, mind, caused - the 'destructive run and the major problem for the British economy' we are all having to suffer through now. Namely, the worst peacetime recession in modern British history. That's how cognitively dissonant the Brown-Labour narrative is on the banking crisis and recession for which, I and many others maintain, Brown is directly responsible.

I'd say Osborne is absolutely, champagne cork-popping cockahoop tonight, and about a dozen Nokias have been obliterated on the bunker walls. It seems Bernanke and Obama alike are distancing themselves from the tainted loser that is Brown, just like that little French gnome Sarkosy did yesterday.