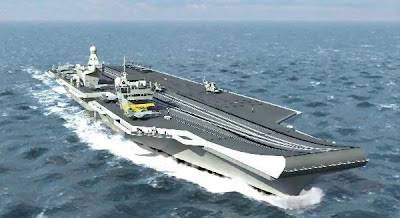 Iain Dale had the story earlier this evening, but now that it has been confirmed on the Channel 4 news website, one can only say that this is the most extraordinarily shocking news yet about this wicked government's handling of a financial and economic disaster largely of its own making. Defence is to face Labour cuts of beyond 16% at a time when Britain is at war. On a day when Brown announced at the Copenhagen junket he was happy to waste a whopping (and borrowed) £1.5Bn of British taxpayers' money on other countries' infrastructure, we discover, via some sort of leak to a journalist, that billions are to be stripped out of the defence budget, including, potentially, the cancellation of two major capital projects (the two supercarriers and the A400 transport aircraft). Why? Well, on the face of it as a seriously belated reaction to the MoD's huge procurement mismanagement and overspend during Labour's disastrous period in office, but in reality because Labour cynically imagines that defence is not a priority for them because it does not appeal to its core vote or clientele. Perhaps that's why there was no mention of it in the PBR, another bit of brazen dishonesty beneath contempt on the part of Brown and his ventriloquist's dummy, Darling.

Meanwhile, our troops continue bravely to struggle through in Afghanistan, undermanned, underequipped and under-represented in Westminster. If you have found it difficult to contemplate the depth of the cynicism of this regime up to this point, this latest betrayal of our armed forces, already cut to the bone after 13 years of Labour hell, should leave no further room for doubt: the only thing they care about is saving their own skin. And that is indefensible.

My God, this stupifyingly duplicitous bunch of dangerous political whores calling itself a 'government' needs to be wiped out at the general election, or else they will truly annihilate Britain. They should be hammered into the dust, if not for these devastating cuts, for which there might have been an argument had they been but one component of a coherent, across-the-board emergency plan for tackling Labour's (and consequently our) deficit and debt crises, then for the abject dishonesty which this latest scandal once more exposes. This Labour government can't be straight with anyone, because it is, as a body of people, starting with its unelected liar-in-chief, Brown, a total stranger to the truth. It's habitual and they should be made to pay for that habit by being annihilated themselves - at the ballot box.
Posted by Jon Lishman at 12/11/2009 08:24:00 pm