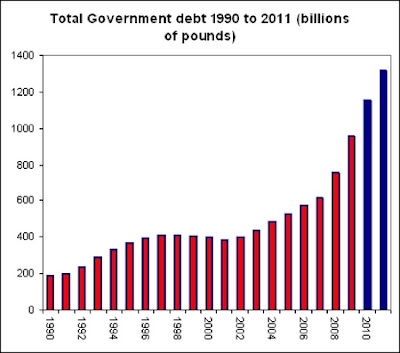 Today, the international (and all-powerful) New York credit rating company, Moody's, warned that thanks to Gordon Brown's disastrous financial policies over the past decade, which has left our public finances in a catastrophic condition and still worsening, UK government debt could be tested in the very near future and downgraded from AAA to A1. This would make government bond sales - its out-of-control borrowing, in other words - much more expensive and, as a consequence, would put Britain firmly on the road to debt default. In terms of the long term future of the British economy, however, this prospect is a serious but minor detail when compared to the scale and the cynicism of Brown's scorched earth policy in his attempt to dupe the population into thinking there is some form of economic recovery in his attempt finally to get elected. He's willing to risk the downgrade - and will go on spending us into oblivion - just to secure a mandate.

If the UK does emerge from recession this quarter - and, after today's terrible manufacturing figures, there must remain some doubt about even that modest hope - it will be a fake recovery fuelled by astonishing and, as the Moody's announcement today says in no uncertain terms, a totally unsustainable level of borrowing. My view? Well, it's difficult to express how troubled I am by polls which suggest that Brown's utter, utter dishonesty, delinquent economics and vicious political tribalism might somehow be starting to turn people's heads. But I suspect that that is more to do with the re-emergence of Alastair "David Kelly" Campbell and his narrative of triangulation, expediency, smears, spin and lies, which were all-too evident at last week's PMQs with the use by moron Brown of that ridiculous 'Eton' jibe.

Even if Campbell thinks he can lie Labour all the way to a fourth term, (and that's all he's ever achieved, beyond poisoning and corroding British politics during his terrible career - namely, to lie Labour's way into power three times) one thing even a complete stranger to reality like him can't do is spin his way out of a debt default, a currency collapse and a total meltdown in the public finances. He might have been able to lie his way into a major war, and out of responsibility for Kelly's suspicious suicide, but even Campbell can't mask a cataclysm of the scale of Brown's economic bust. Can he?

Finally, as is my wont, I'll quote David Blackburn's post earlier this evening on the subject of Brownomics and the credit downgrade in full. Because it's rather good.

Moody’s AAA sovereign monitor was published today, and whilst the UK’s AAA status remains ‘resilient’ the situation is far from rosy. The report states:

‘The UK economy entered the crisis in a vulnerable position, owing to the (overly) large size of its banking sector and the high level of household indebtedness. Both continue to weigh on economic performance. Net bank lending to the UK business sector has continued to contract through Q3 2009, and repairs to household balance sheets (i.e. the rising savings ratio) may weigh on demand for some time to come.

The depth of the crisis has been mirrored by the ongoing deterioration of public finances (with gross debt/GDP having risen from 44% at the end of 2007 to an estimated 69% at the end of 2009). It also raises considerable challenges going forward, as the downward adjustment of potential output during the crisis will result in a recurrent shortfall in tax revenues, which, if not compensated by a parallel adjustment in expenditure, would leave the government with a permanent deficit.’

First into recession because of Brown’s profligacy, Britain’s recovery is stunted by continued spending and the government’s inability to address the credit freeze. Moody’s assert that Britain’s AAA status will be endangered unless fiscal retrenchment is implemented soon, something that global bond markets are relying upon too. Moody’s assert:

‘While assumed capacity for fiscal adjustment currently supports the maintenance of the Aaa rating of the UK government, this assumption will have to be validated by actions in the not-too-distant future to continue to provide support for the rating.’

Britain cannot sustain this level of debt. We near an Ireland-style downgrading followed by an era of ruinously expensive borrowing. Labour’s political and economic strategy dictates that fiscal adjustments will not be undertaken until 2011. Tomorrow’s Pre Budget Report will contain time saving measures, in the form of further cheap, low yield gilts and perhaps more Quantitative Easing, to allow the government to execute its strategy, borrow cheaply and prepare for future retrenchment. Will the markets wait that long?

The need for a new Conservative government has never been more desperate - at least, not since 1979 and the last Labour economic implosion. Let us pray that Cameron knows how to make that case. But because he's now up against forces so cynical and so calculating, that job just became a lot tougher. Perhaps a credit downgrade, in the long run anyway, could end up being just the reality-checking medicine an electorate, still hoping against hope that Brown's crisis (if not Brown) will just magically go away, now requires.

Perhaps, in the long run, it's be the best thing that could happen to the UK, if nothing else than to snuff out Brown as a political possibility and save us from the total horror story five more years of his economic nihilism would guarantee. The stakes are that high.
Posted by Jon Lishman at 12/08/2009 06:37:00 pm