Dizzy has found a remarkable website charting the spread of the Gulf of Mexico BP oil spill. It's a hefty leak, and what you can do with this tool is superimpose its vast expanse on wherever you like in the world to see just how huge it is. I suppose there is some valid environmental message in such an exercise somewhere. I'm not sure what it is, exactly, beyond 'Cor, that really brings it home to you', or maybe, 'Cor, isn't the ocean big!'.
There is another use, however, of this program, as Dizzy demonstrates. You can bury your least favourite bits of your own country under thirty million barrels of oil slick. Neat. Dizzy chose Scotland. I sort of approved at first, but in the end it wasn't target-rich enough for me, so I opted for an alternative ground zero of Huddersfield so that I could take out the entire expanse of the two giant northern English conurbations and Labour heartlands.
Unfortunately, I had to take out York, Harrogate, the Peaks and the Dales in order to get Tyneside. Oh, and half the Irish Sea, all of North Wales - and Shrewsbury. Well, sacrifices had to be made to get them all under the one spill - without threatening the Home Counties. Besides, who's really going to miss Mold? And I did save the Lake District...sort of. You just can't get to it any more. 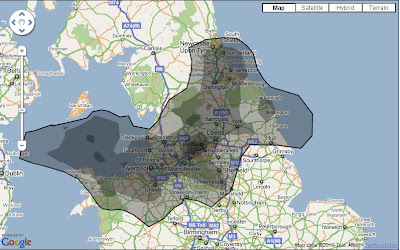