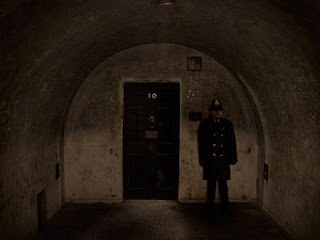 Iain Martin has provided, presumably from his sources inside the civil service, a fascinating and chilling insight into Brown's autocratic, paranoid and hopeless (mis)management of day-to-day Prime Ministerial business. If you haven't already read it, click through here.

It will take a lot of effort to work out just how much damage three years (or 13 years if you include his time as a diabolical, serially disloyal Chancellor) of Brown's weirdness and chaos in Downing Street has done to this nation. The litany of disasters that can be traced directly back to Brown's bunker door are emerging daily, of course, so the process could take less time than we think.

Quite frankly, I think how such a man was elevated to the level of the highest office in the land in the first place, without even the pretence of any form of democratic election, should also be a source of deep and urgent study. Why? Because it must never, ever be permitted to happen again and if that means radical alterations to the rules governing the way Prime Ministers are chosen, then so be it.

In the meantime we can be happy about a couple of things, and Martin alludes to these in his excellent piece: stable, reasonable, elected people are back in charge, cabinet government appears to have returned and the principles of ministerial and collective responsibility look like being rigorously reinstated.

We shall see, but after the cocksure, cowboy, sofa government years of Blair and the mentally disturbed, incoherent, mafiosi years of Brown, it certainly feels like accountability, professionalism and, crucially, normality have returned to Downing Street, Whitehall and, perhaps (just perhaps), even Westminster.

Well, you might disagree. But God help us all if I'm wrong!

Just remember, Brown's chief hit man, Balls, is still around, waiting in the wings, shamelessly spewing his poisonous politics of propaganda, division, dishonesty and fear. He's on This Week right now lying through his teeth about, in this case, his many crimes against Tony Blair on behalf of his boss, Brown, to whom he remains fanatically loyal. The chances of the evil Balls becoming leader even of his own party are pretty slim, I admit, (oh I do hope he wins!) but there's still that chance, however slight, and the frailties of our system, exposed by the Brown 2007 coup d'état, mean that at that point, he would be a hell of a lot closer to Number 10 than is sanely conceivable.

If Iain Martin's revelations reveal just how very, very, incredibly bad Brown was, just imagine what life would be like under Prime Minister Balls.