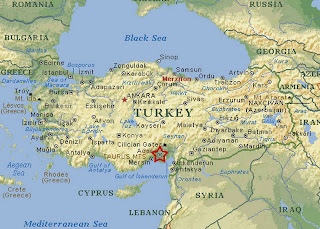 I rather like Dan Hannan's latest post about how shockingly bad the treatment of Turkey has been - and still is - by the EU (in reality, when it comes to Turkey, the semi-racist France and the fully racist Germany). This probably telegraphs my ignorance, but he also taught me a new word: "Turcophile". I like this word and I'm going to use it in polite conversation from now on. I also like the concept it denotes: admiration for Turkey and Turkish people. And, it seems, I'm not the only one. David Cameron is a Turcophile too. But that was always to be expected, says Hannan, for he is a hard line traditionalist Tory at heart and always has been. Yet there is a lot more to his Turcophilia (?) than mere nostalgia and tradition, and a lot more at stake should the EU (Germany) be permitted to ostracise Turkey any longer. As Hannan says:

I have argued before that David Cameron is a remarkably traditional Tory, and his attitude to Turkey is as traditional as they come. His – my – party has been Turcophile since Derby’s leadership a century and a half ago. (So, come to that, has The Daily Telegraph, which broke with Gladstone over his anti-Ottoman policy in 1877, and has been Tory ever since.) Cameron’s reasons for backing Ankara’s EU membership bid are solidly Conservative: Turkey guarded Europe’s flank against the Bolshevists for three generations, and may one day be called on to do the same against the jihadis. In the circumstances, the PM believes, Turks are being treated ungratefully by their allies.

To me, the "guardians of the flank against the jihadis" argument for halting Turkey's shabby treatment by German politicians in particular is bullet proof. But what about EU membership? Well, it seems to me that the EU is slightly worse at foreign policy than the last Labour government - utterly appalling in other words. Who'd want to be associated with an organisation that appears to be quite adept at upsetting all of the people all of the time while simultaneously being completely unable actually to do anything, anywhere, ever. Furthermore, if you accept the real motives behind the EU's passive-aggressive bureaucratic obstructionism over Turkish membership are ones of national self-interest on the parts of the usual suspects, then you realise that this translates as outright hostility in terms of international relations, whether it comes via Brussels or not. Why on earth would Turkey want to be a part of any of that? (Why on earth do we, for heaven's sake!).

For what it’s worth, if I were Turkish, I would be against EU membership. Turkey is a dynamic country with – in marked contrast to the EU – a young population. The last thing it needs is the 48-hour week, the Common Agricultural Policy, the euro and the rest of the apparatus of Brussels corporatism. Why tie yourself to a shrinking part of the world economy; when you have teeming new markets to your east? Why submit to rule by people who barely trouble to disguise their contempt for you?

Good question. He answers it, too.

There is a difference, though, between choosing not to join and being told that you’re not good enough to join. Turks are as entitled to their pride as any other people. The way they have been messed around can hardly fail to make them despise the EU. Which, in the broader sweep of history, is likely to hurt the EU more than it does Turkey.

Now, you know as well as I do that Hannan is a smart dude. He's not just talking about Turkey, is he? (Or was that obvious?) He's talking about us, too. The reason why up to 70% of the UK's adult population if not despises then mistrusts the EU is because they feel the cold blast of its contempt for their beliefs, traditions, sense of independence, history, national identity and sovereignty every day. That's why I'm pretty certain Hannan is on to something here, and so is Cameron. By championing Turkey, and wearing his Turcophile tendencies on his sleeve, he can appeal to people's in-built Euroscepticism at home, temper the coaltion's Europhiliac tendencies and highlight Brussel's in-built Angloscepticism. All at a single stroke.

If this is true then it's a foreign policy stroke of genius. Or maybe it just seems that way after years of Labour verbal incontinence on just about any international relations topic you care to think of, and total incompetence in actually doing anything, or total dishonesty and betrayal in the case of the EU.

Maybe, for a change, this new Turcophilia is just the right policy. How refreshing.