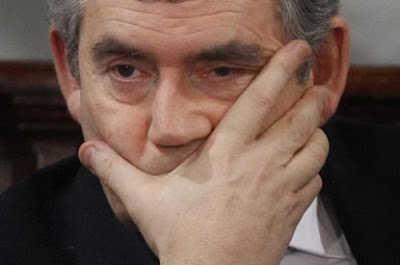 ...according to decent MSM blogger, Nile Gardiner (whom SNP apologist and recent equivocator on terrorists, Alex Massie, surprisingly of the Spectator, refers to as a purveyor of "weapons grade stupidity", no less. Pots and kettles, Massie. Pots and kettles.)

Here's Gardiner's latest offering on this last piece of Brownian cowardice. Personally, I'd say it's a laser-guided smart bomb right down Brown's trousers.

The Prime Minister has finally broken his silence over the shameful return to Libya of the Lockerbie bomber, five days after the event. It is too little too late. Why has it taken Downing Street nearly a week to even express an opinion over the appalling hero’s welcome received by Abdelbaset Ali al-Megrahi in Tripoli, amid scenes that have sparked outrage and fury in the United States as well as widespread revulsion at home? This is not leadership but moral cowardice on the part of an increasingly spineless PM who is afraid of offending an odious but oil-rich tyrant with a long history of backing terrorism against Britain and America, as well as brutalizing his own people.

Brown declares that he was “angry and repulsed” by the abhorrent display put on by the Libyan regime, but clearly not angry enough to condemn the actual release by Scottish authorities of a convicted terrorist found guilty of murdering 270 people, including 52 Britons. His half-hearted comments reflect the ambivalence of the Labour government over terrorism, exemplified by Foreign Secretary David Miliband’s recent declaration to BBC Radio 4 that terrorism was justified in certain circumstances.

Gordon Brown’s pathetic response will do little to soothe the mounting tension between the United States and Great Britain over the Lockerbie issue, or the heartfelt anger of many of the grieving families of the victims of the Lockerbie bombing. Brown has placed the appeasement of a dictatorial regime above the concerns of Britain’s closest ally, and continues to undermine the Anglo-American Special Relationship.

It is also highly significant that Brown refused to criticise the actions of Kenny MacAskill, the Scottish Justice Secretary, even though members of his own party have strongly attacked the SNP-led Scottish administration over the issue. The PM’s denials over any British government involvement in MacAskill’s decision carried an air of desperation against a backdrop of mounting evidence of high level contacts between the Labour government and Colonel Gaddafi’s inner circle.

The Prime Minister’s spectacularly unconvincing performance today will only add to the pressure on Brown to come clean over the exact details of his own discussions with Gaddafi, as well as those between Lord Mandelson and Gaddafi’s son Saif. He has done himself no favours at all by refusing to address the three central questions that need to be answered.

Did Gordon Brown and senior British government ministers support the freeing of Megrahi? What pressure was applied by the Labour government to secure Megrahi’s release by Scottish authorities, and was an agreement struck between London and Tripoli that Megrahi should walk free?

The Brown government’s lack of transparency on this issue must be challenged in the coming weeks and months, ideally through an independent inquiry. If left unresolved, the Lockerbie Bomber scandal will undercut transatlantic intelligence and judicial cooperation, and will lead to growing tensions in the Anglo-American alliance, a dangerous course that is distinctly against the British national interest.

When have Brown or Labour ever done anything that was in the British national interest? Never, is the answer. We've had 12 long years of a "government" that put one interest above all others: its own. And we've had a chancellor - now, astonishingly, Prime Minister - for 12 years who put his own interest above everything else in the entire world, including his own party: Brown. Well, not any more Brown-Labour. Not any more.