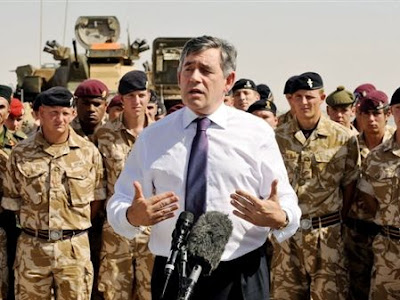 The first casualty of war is the truth, so the saying goes. That may be so, but now it seems the lies themselves, once the truth is KIA, can claim the odd victim, too, or so Sky News reported this morning...

A former spin doctor is to sue the Government, claiming years of being made to tell lies over the war in Iraq made him ill.

John Salisbury-Baker was responsible for supporting dead soldiers' families, attending funerals and dealing with the media.

He claims holding back information about troops' safety led him to develop stress-related illnesses.

The 62-year-old is set to sue the MoD for disability discrimination.

While working at Imphal Barracks in York he told the media army vehicles such as Snatch Land Rovers could withstand roadside bombs.

He then "felt responsible in some way" when soldiers were killed, his partner Christine Brooke said.

She explained: "It goes back to the fact he felt torn because he had a moral dilemma based on the fact he knew a little bit more about the situation than the people he was dealing with whose sons had died."

Ms Brooke added: "We're all aware that some of the personal protection equipment wasn't of as good quality as it might have been and there were things missing, I think that's sort of common knowledge, but perhaps the families weren't as aware.

"John felt that he was holding back, being frugal with the truth.

"I think it's caught up with him really, it pushed him over the edge as far as his levels of stress were concerned."

Mr Salisbury-Baker was diagnosed with stress-related angina in 2007 and PTSD a year later.

But while Salisbury-Baker fights for his compensation for the 'damage' to his mental health being a mouthpiece for Labour's endless lies about our troops' equipment he claims has caused (yes, mate, it's called a guilty conscience), the lies go on and the troops keep dying, as umpteen reports and blog entries have shown just today. Here, for instance.

For myself, I would simply point out that if this bloke knew he was telling lies on behalf of a government hell-bent on keeping the truth about their incompetence from the nation when he was in post, and if he knew our troops were dying as a direct consequence of that government incompetence, then he should have had the courage to speak out about it in public at the time. That he didn't says as much about him as the lies themselves speak volumes about this Labour government (under both lying leaders, Blair and Brown).

He's a coward, isn't he? Yes, more or less. So it's pretty straightforward really: set aside the money he would be awarded if (ridiculously) he won his case for the genuinely wounded and the families of the war dead. After all, his willing dissemination of Labour's lies contributed to their plight, whether he liked it or not.