Terrorism: Justifiable - If You Happen To Agree With The "Cause" 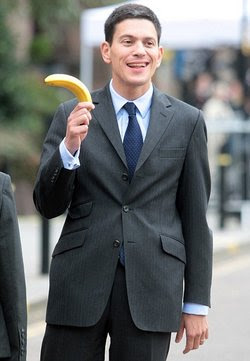 So, extraordinarily, incredibly, unbelievably, astoundingly says the incumbent minister in charge of Her Majesty's Foreign and Commonwealth Office, David Miliband. I did hear on Radio 4 a few days ago while driving home from work a fawning, honeyed plug for this idiot's interview. I paid it no mind, thinking there was no way even he would be stupid enough to go down that road. I figured he'd give his qualified support to the ANC cause he connects himself with like any good little snot-nosed, Oxbridge, PPE student with a well-connected Marxist daddy (connected with Joe Slovo's killer Communists, for instance), but distance himself from their murderous terror campaign in an appropriately diplomatic way as befits a Foreign Secretary. It seems I was wrong. Read Nile Gardiner's blog about this foreign policy disaster and weep:

The Foreign Secretary’s remarks to the BBC Radio 4 Great Lives programme condoning terrorism in some circumstances are an absolute disgrace, and should be disowned by the Prime Minister. The Radio 4 interview focused on the life of South African Marxist Joe Slovo, a leading member of Umkhonto we Sizwe, the military wing of the African National Congress (ANC). The ANC’s bombing campaign included the targeting and killing of civilians.

As The Daily Mail reports, when asked by presenter Matthew Parris whether terrorism can ever be justified, Miliband stated:

“Yes, there are circumstances in which it is justifiable, and yes, there are circumstances in which it is effective.”
“The importance for me is that the South African example proved something remarkable: it looked like a regime that would last forever, and it was blown down.”
“It is hard to argue that, on its own, a political struggle would have delivered. The striking at the heart of a regime’s claim on a monopoly of power, which the ANC’s armed wing represented, was very significant.”

The full interview can be heard here, and yes, the comments are accurate.

Miliband’s ill conceived statements demonstrate a serious lack of strategic judgment by a senior government official at a time when Britain is actively engaged in combating terrorism both at home and across the world. They will be used by homegrown Islamist terrorists to justify their own terror attacks against British targets, as well as by the leadership of al-Qaeda and the Taliban.

There are absolutely no circumstances under which terrorism is acceptable. The Foreign Secretary is sending an extremely dangerous mixed message to Britain’s enemies and handing them a huge propaganda opportunity. He should issue an immediate apology and the Labour government must clarify whether or not it actually believes that some forms of terrorism are acceptable.

It is hard to see how Miliband can continue representing Britain on the world stage after he has publicly condoned the use of terrorism in certain situations. The figure responsible for crucial aspects of British anti-terror operations cannot be seen to be justifying the use of terror in any form, whatever the historical context. The Foreign Secretary’s foolish words are a bridge too far at a time when British soldiers and security services are putting their lives on the line combating terrorism.

Who can possibly argue with any of this analysis? Government policy for decades has been never to negotiate with active terrorists. Has this policy changed? Are we now to assume that this Labour government will not only listen to, but actually support, terrorist organisations if it happens to share their aspirations and/or worldview? That's the direct implication of Miliband's lamebrain platitudes. And it is a desperately dangerous one. It's also obvious why: Miliband has admitted that terrorism is justified "under certain circumstances" and insodoing has just given the green light to every violent extremist on the face of the earth to argue precisely this: "We believe in what we're fighting for - and even if you don't, we have the right to do whatever we think it will take to achieve our objectives. And you've just admitted that."

I'm not even interested in this sickening fool's resignation (though that must be the minimum requirement for his criminal arrogance). It's too late to worry about that. Lives of fighting British soldiers - possibly even British civilians - will be lost as a direct consequence of the morale boost he's just handed to those whose hatred of Britain is only matched by their willingness to commit mass murder.

Whatever you think of Joe Slovo (and I think very little of him), or of the happy outcome that was South Africa's eventual, general liberation and tentative reconciliation, the fact is that Miliband, all on his own, has just handed the Taliban and Al Qaeda a massive, deadly propaganda triumph - and the initiative. Bravo.
Posted by Jon Lishman at 8/16/2009 03:46:00 am