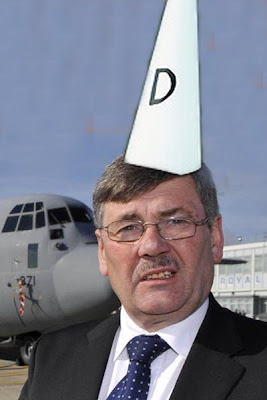 "Medic!"
Uncle Bob has already blogged brilliantly about this latest piece of Labour filth, so I'll keep my scornful rant brief: New Labour are the most corrupt, twisted and morally empty group of incompetent wasters this country has ever had inflicted upon it. You still have doubts, after everything that's been written, blogged, proved and resigned over? Well, here's a bit more for you, this time from the ST. Read on...

A Freedom of Information (FOI) request submitted to the Ministry of Defence, and uncovered by The Sunday Telegraph, asks for publication of any correspondence between Gen Dannatt and Hadyn Parry, the chairman of the Help for Heroes charity.

It comes after Labour MPs and ministers were accused of using FOI laws to make trouble for Sir Richard by unearthing his expenses claims, after he publicly criticised the lack of resources given by the Government to the troops in Afghanistan.

Whilst the MoD would not disclose who was behind the Help for Heroes FOI request, which was submitted in June, Conservative MPs claimed it looked like fresh evidence of a smear campaign.

Liam Fox, the shadow defence secretary, said: "There is no target that Brown's bullyboys will not pick upon to protect themselves or divert attention from their catastrophic management of the military. New Labour is now the most corrosive and corrupting influence in British politics."

Whoever submitted the FOI request could have been seeking to find out whether Gen Dannatt had claimed expenses from Help the Heroes following his unpaid work on the charity's behalf.

Mr Parry described Gen Dannatt's work for the charity as "exemplary". He said: "Sir Richard has done a tremendous job for the charity. His work has been exemplary – beyond reproach.

"He has never submitted any expenses claims, nor have any of the other charity trustees, because we want as much money to be spent on charitable work as possible."

Last week it was revealed that, on a tip-off from inside government, several FOI requests were submitted to expose the 58-year-old general's expenses. Kevan Jones, the Veterans Minister, was named on political website Guido Fawkes as the figure behind it. But he dismissed the accusation as summer tittle-tattle and heaped praise on Gen Dannatt.

When allegations of a smear campaign first emerged a month ago, Bob Ainsworth, the Defence Secretary, sent a note to all his ministers – Mr Jones; Quentin Davies, Defence Equipment and Support; Bill Rammell, Armed Forces; Lord Drayson, Strategic Defence Acquisition; and Baroness Taylor, International Defence and Security – warning them not to brief against General Dannatt and demanding "complete support" for military commanders.

But last week it emerged that a minister had discussed "chasing" Gen Dannatt over his expenses in an attempt to smear him. Requests were allegedly made under the FOI Act, with the backing of the unnamed minister, to find out the extent of entertaining by the general, who retires as Chief of the General Staff next week.

It was also alleged that a minister had called Gen Dannatt a "complete bastard" for making so many public statements critical of the resources given to the troops in Afghanistan.

Not content with their usual, now-predictable, contemptible attempt at rubbishing anyone who dares to speak the truth, a method perfected by Alistair Campbell and Mandelson (the truth in this case, as Dannatt has bravely implied on many occasions, is that total Labourist incompetence and, one is forced to suspect, their underlying hatred of the armed forces, has cost the lives of many British soldiers in Labour's foreign adventures), now they are willing to drag into their appalling smear campaign a charity set up to help the ones who make it back from the front merely wounded, but who are then abandoned by their own country (another Labour triumph).

Who needs the Taliban when you have an MoD occupied by these uberhoons? Just when you thought they couldn't get any worse...
Posted by Jon Lishman at 8/23/2009 01:20:00 pm