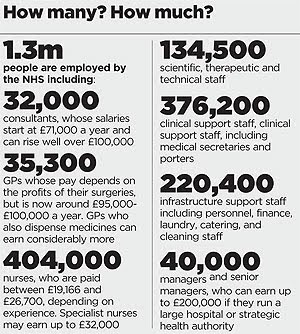 NHS staff: Not worth the money

The problem with the NHS is not the commendably egalitarian principle upon which it is founded: universal health care (not, you will note, "free" health care), but the appalling behaviour of vast numbers of the people it expensively employs. I felt absolutely certain that my own, generally terrible (with one exception) experiences of British hospitals are by no means unique. So you can imagine I was pretty relieved to find there's at least one honest journalist left in Britain, who is unafraid to challenge the Labourist myth, which has taken such a firm grip of the British imagination, that the overall performance of NHS staff, 'carers' and managers alike, is anything other than below average. I'm not the only one, it seems, that knows NHS staff are often rude and/or incompetent, overpaid and quite frequently do more harm than good, particularly but not exclusively to the elderly; that its disastrous management practices and overmanning has bled treatment budgets dry; that its costs are now completely out of control.

I'm not the only one, it seems, who has lost a member of his family as a direct consequence of if not malpractice, then mistreatment, by medical staff.

Other than all that, I do concede: it really is the world's best health service.

Christina Patterson in today's Indy is the honest journalist in question. While she does (inevitably) pull one or two punches thanks to her inexplicable left-slant, the thrust of her piece is sound and self-evident: the National Health Service does not adequately serve the people who pay for it.

Since I don't twitter or tweet or cheep, I can't, alas, add to the patchwork quilt of warm, cosy feelings to which Sid_Goon, LimeJellyTeddy, Flopsydaisy and a certain Gordon Brown have contributed lovely little crocheted squares. But it's hard not to be a little bit touched by the British response to the Americans who will fight to the death to preserve the right of 40 million of their neighbours to die without medical treatment because they are – spit the word – poor.

While our transatlantic cousins dig deep into their pockets to fire javelin or hellfire missiles at their Joker president and his plans to swap the current system of private health insurance for communist death camps, we're responding with the battle equivalent of macramé catapults and pots of home-made jam. Sarah Brown, who has, apparently, attracted a massive Twitter following for her comments about nice weather, strawberries and trips to the zoo, was in Hallmark mode. "#welovetheNHS" she said, making impressive efficiency savings on spacing, "more than words can say".

Andy Burnham, the 12-year-old Health Secretary, indicated post-political aspirations to reffing by declaring himself "over the moon about strong support for NHS", but felt obliged to add that his primary allegiance as New Labour new lad was to Everton FC. And "PM" (not, thank God, the one whose moobs have recently been subjected to massive media scrutiny) thought he'd kill two birds with one stone by drafting a Twitter-length foreword to his next book on courage. "NHS often makes the difference," he said, "between pain and comfort, despair and hope, life and death. Thanks for always being there." Or perhaps it was intended as a text message to Sarah.

And then, of course, there's the public. Civilians, non-celebs, non-politicians, ordinary people (but not, please God, "hard-working families") boring on about how they had cancer and the NHS saved their life. Well, let me add to them. I had cancer and the NHS saved my life. I'm extremely pleased to be alive, and I'm very, very grateful. But the process, it has to be said, lacked grace.

I will not bore you now with the contradictory statements by consultants, or the three-hour waits for appointments that were cancelled, or the invitations to appointments for dates which had passed. I won't bore you with the lost files, and the lost X-rays, and the mammogram that turned out to be an X-ray of an ankle, or the surgeon who told me that he thought my approach to a mastectomy (which I didn't, in the end, have) was "a bit heavy". I won't bore you with the nurses who sighed and sulked and were soldered to their chairs, apart from the one who asked me, in a rare fit of bewildered humanity, why I was crying. Er, because I've got cancer and I'm still in my 30s? A teensy bit upsetting, non?

But I will tell you this. The big problem with the NHS is the people in it. Maybe they start out wanting to help their fellow human beings, to lift them, as our dear leader says, from pain to comfort, from despair to hope. Maybe they fill out a form in triplicate (two of which get lost) saying that they want to help people, and get sent off to training schools: the consultants to one where they learn to flick through a file with a sense of harried self-importance and turn to you briefly and sneer; the receptionists to one where they learn to regard the arrival of a patient as a nasty intrusion in a nice day's chatting, and one to be punished with a lengthy wait; and the nurses... It would be frivolous to mention Abu Ghraib. But tempting.

And as for the managers, some of whom earn more than the Prime Minister, more even than a GP... Well, let's just remind ourselves that a group of them, from Liverpool Primary Care Trust, have suggested this week that children should be banned from seeing 101 Dalmations because they might catch a glimpse of a cartoon cigarette. How about forgetting being Stalin and sorting out your IT and your files?

There are exceptions. Of course there are exceptions. And in the six years since I found that little lump in my breast, a lot has got better. Waiting times for my check-ups are now much shorter. The waiting room is much, much nicer and at Christmas you get mince pies. So when, a few weeks ago, one of my friends found a lump in her breast, I hoped things would be better for her. She was diagnosed quickly, thank the NHS; she was operated on quickly, thank the NHS, but the nurses were sulky and lazy and rude. One of them, she said, spent all day at her computer, writing religious poems.