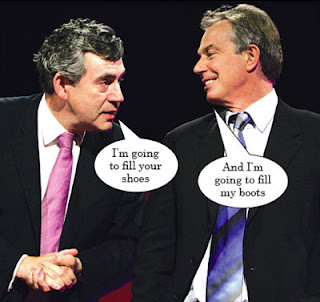 It seems there is nothing much to learn directly from the MPs allowances document released today, apart from the fact that MPs all seem to take full advantage of the so-called second home allowance - even the multi millionaires, of whom there are many. Fair play to them I suppose. Just obeying the rules (they make-up).

There was one little tidbit in the rightly underused Column 7, "Staff Cover and Other Costs", which deals with absence and illness.

The highest figure in this column (by miles) ? The entry for one Blair, Rt Hon Tony.

Click on the the naff snapshot to see for yourself:

Very odd, seeing as he'd long left his office and the country by then. Yes, yes - he was still an (awol) MP. But he was also PM - according to the previous General Election.

My theory: since the absent member of staff was Blair himself, he claimed the allowance and gave it to Brown for being his "cover". (A sort of 'supply PM').