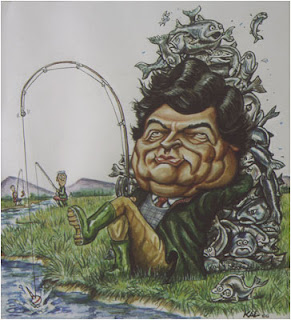 It's good that Nigel Lawson has come out to defend his record on tax, and explain why hiking the highest rate back up to punitive levels is such a bad idea. As he explains in the Telegraph today, when in 1988 he reformed the tax system the effects were almost entirely beneficial:

Far from costing money to the exchequer, it brought in increased revenue, as many of the ablest came to London from less benign tax regimes overseas; as many perks were abandoned in favour of higher pay; and as complex tax avoidance diminished. Indeed, the tax take from the highest paid (defined as the top 5 per cent of taxpayers) not only increased substantially in absolute terms, but it contributed a very much higher proportion of the total income tax take than ever before. And although it is not possible to measure this, it undoubtedly gave a fillip to the vigour and success of the British economy.

That's refreshing to hear from the man himself, and I know it is true because I can remember the transformation of the country during that period very well. The casting-off of the past in the Eastern Bloc countries in their thirst for liberty was mirrored in Britain by the casting-off of old, discredited, anti-aspirational, left wing dogma. There was a powerful feeling in those days that the idea of genuine, individual freedom had finally won. The thought disease that socialism-in-practice had become was once and for all defeated. What else, after all, was the New Labour project than an admission of that truth?

I can only hope that the Tory hierarchy open their eyes and ears and take Lawson's lesson on board. Because the impact of the Labour hike is going to be disastrous:

As for the renewed brain drain that the 50 per cent rate will engender, it is inevitably the highest of the high earners, who contribute most in tax yield to the exchequer, who will become tax exiles. Not only do they have the greatest incentive to do so, but it is far easier for them to move abroad than it is for those only slightly above the £150,000 threshold at which the new rate bites. The Tories have nothing to lose in the short run, and much to gain in the long run, from opposing it.

The Tories might have 'nothing to lose in the short run', but we certainly do. As far as I am concerned they have to make the rational case on tax. And if they make that case successfully, it is not just they who will have 'much to gain in the long run'. The whole country will benefit.

One thing's for sure, even if Labour's ruinous panic policy-making can be stopped before it does even more damage, reassembling the pieces is going to take some strong will and a clear, proven philosophy.

Lord Lawson has explained that proven philosophy to those that need to listen very clearly in his article.