Not As Bad As We Expected: Far, Far Worse 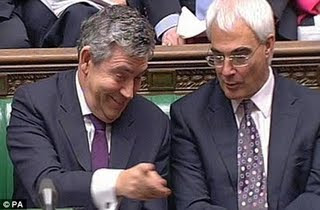 Darling's Pre-budget nonsense represents the most appalling assault on the middle classes yet, who, as usual, are going to be squeezed dry to pay for useless Labour's economic bust. It also means that Brown Labour has now dropped any pretence that it cares about anything else other than its short term goal of somehow getting itself re-elected. In fact, though, it could be said that this dodgy dossier of Tory-bashing tribalism is so utterly awful that it amounts to a capitulation - at least by the feeble realist arm of Labour, possibly located at the Treasury. They can't win the next election based on an economic record as catastrophically terrible as Brown's, so the story goes, so why not use the remaining months of power to shore up the core vote and the heartlands? Limit the damage and bugger the country.

Benedict Brogan seems to think this - and more. The budget wasn't as bad as we expected, it was far, far worse.

Even before we’ve trawled through the small print on pensions and tax changes, the pre-Budget report has lived up to the billing. Scorched earth, poison pill, you can choose your metaphor but the key point is that this was a political statement designed to protect Labour’s sectional interests, boost its core vote and stuff the Tories at every turn. George Osborne will probably get the prize for offering the pithiest summary in his reply to Alistair Darling: the greatest golden rule of all is that you can’t trust a Labour government with your money.

Every other line in the Chancellor’s statement was shaped to make a political point: ‘unemployment is never a price worth paying’, ‘government action has made a real difference’, ‘those who doubt the effectiveness of tax credits’, ‘when we could have chosen to do nothing’, all direct digs at the Tories. The ship is sinking under him but the captain blames the passengers.

The measures likewise: for example, a whacking great increase in the value of the state pension (2.5pc when inflation is negative?!), ditto other benefits, represents a gratuitous increase in the cost of entitlements, in the knowledge that the Conservatives need to review them downwards. Reckless, unaffordable, yet how can the Tories reasonably be expected to reverse that one? Such is the political craftiness of Gordon Brown. Or take the freezing of the threshold on the 40p rate: all attention is on bankers, but this is where senior nurses, policemen, middle managers will suddenly find themslelves dragged into the higher rate. Then there’s the 0.5pc increase in NICs, and the pension cap on public sector workers. Ditto the tax on bonuses: a paltry £500m in, but how many billions out as confidence ebbs away from the City. And there’s the business about taxing employer pension contributions: it hits those on above £130,000 – wealth creators they may be but how much sympathy will there be for them? Again, crafty.

“We take these decisions from a position of strength,” Mr Darling said, to howls of derision from the Tory side. The economy is crocked, the markets are pulling the plug on UK plc (bookies have just cut the odds on us losing that AAA rating), and those whose efforts are needed to get growth going again are going to have to pay a lot more, so what is he talking about? The strength that comes from being the party in power, free to use the forces of Government to its advantage. It is in office, so it is still strong. It can be outrageous, it can trash the place, it can do what it damn well pleases because it knows that the mess will be for the Tories to clean up. Labour is already waiting to be in Opposition, shrieking at any attempt to undo any of this. The civil service has been muscled aside, its warnings ignored, Labour now at the controls shouting ‘Gordon is great’ as it pushes the throttle down towards the mountain ahead.

Excellent comment and that "you can't trust a Labour government with your money" is not just pithy from Osborne, but oh-so true, too. How much more evidence do people really need that this trainwreck regime is willing to take the entire country over the pricipice (which is what I assume Brogan means by his mountain metaphor) with it? As a reader of this blog said yesterday, this is not just as bad as 1979, it's much worse. At least Callaghan was a decent human being who understood, above and beyond the pettiness of tribal politics, that he and his government (especially Chancellor Denis Healey, but even he eventually put country before party and made, as David Hughes says, the "tough choices") had failed Britain.

Brown actually does know that they have failed Britain too. The difference is, in his arrogant dishonesty and visceral, irrational hatred of the party opposite, he simply doesn't care.

So if you are one of those who think Labour gives two hoots about your country, think again. The only thing that that corrupt, corrupting and bankrupt party cares about is itself, and this is embodied in the blind ambition of Brown, himself the worst Prime Minister this country has ever had inflicted upon it. But he and his party will cripple Britain for a generation before they give up power. It really is finally time for people to wake up to this reality and act accordingly.

Whether you happen to like it or not, the fact remains that the only way to get Brown-Labour out is to vote the Conservatives in. After this latest episode of scorched earth, recession-prolonging, gaga economics from Labour, there is surely now reason enough, if you are otherwise a Tory detractor (unlike me) to hold your nose, bite the bullet and take the plunge.

Never has this country more desperately needed to oust an irrational, wounded and dangerous government and a tainted, failed - and equally dangerous - Prime Minister. So that's the first thing that simply must happen and that means supporting the Tories. All else follows.
Posted by Jon Lishman at 12/09/2009 05:00:00 pm