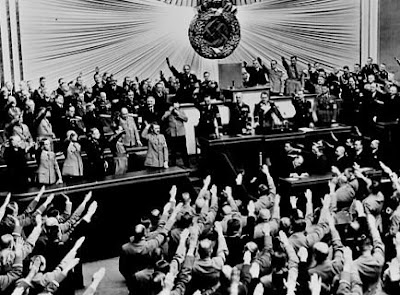 Difficult to imagine a more unpleasant bunch of scary, authoritarian, craven Labourist politicos than the crew governing Swansea City Council, a Labour stronghold seemingly in perpetuity. Having spent decades religiously creating conditions of social dependency first by destroying local schools and then by developing a benefits system which rewards socially and morally irresponsible behaviour, they've finally woken-up to the fact that Swansea (like so many other Labour cities) is basically a social disaster area. Naturally, they will never admit that they and their manifestly tainted socialism are to blame for the situation, but at least they have admitted things can't go on the way they are - mainly because their dear leader in Westminster has run out of our money.

But their solution? Well, one of the ideas discussed by these moronic proto-nazis is - enforced sterilisation! Yup, they want to inflict medical procedures on the very people they've betrayed - for being unfit parents. Simply incredible. I guess it never occurred to them that this might be a little bit controversial. Or that habeas corpus would most-likely forbid such an evil policy in any case. Or that they themselves are evidently far sicker than the people they are decrying and seek to target with this brutality. It's not a case of "you couldn't make it up". It's more "no one in their right mind would ever want to make it up". Truly horrifying stuff.

SWANSEA councillors were labelled extremists by political rivals as the row over compulsory sterilisation rumbled on.

Councillor Alan Robinson, cabinet member for community regeneration, and councillor Wendy Fitzgerald, who is the council's presiding officer, both walked out as a Labour group motion calling for an unequivocal stance on sterilisation was brought up for discussion.

Asked why she was leaving, Councillor Fitzgerald replied: "I have legal issues at this time and I don't think it would be appropriate that I am in the chamber."

Allegations had arisen last week that comments about sterilisation had been made at a council seminar — involving officers and elected members — on how to improve Swansea's under-fire children and family services.

A number of councillors who were at that meeting gave their version of what had been said.

Councillor David Phillips said: "He (councillor Robinson) stated that parents who had children in care should be prevented from having more children, saying, 'If they can't look after what they've got, we should stop them having any more'.

"He did not dispute my accusation that he was advocating forced sterilisation.

"He defended his right to hold such views, and was supported by councillor Wendy Fitzgerald, who said, 'Some places do it'."

Councillor John Miles said he was shocked "the very thought had come out of these people's minds".

He said: "The officers sat there aghast when the comments were made.

"To try to say the comments were not as recorded are completely false.

"Immediately after these comments were made, members of all parties divorced themselves from them."

Councillor Audrey Clement said "enforced sterilisation" were two words that made her sick, but she accused Councillor Phillips of swearing seven times as the alleged comments triggered angry exchanges. She added: "All Councillor Fitzgerald said was that these things happen in countries abroad."

Councillor Paxton Hood- Williams said: "I have heard administration members denying the comments were said. Unfortunately, they were said."

During Thursday night's impassioned debate, a printed email from Councillor Fitzgerald — sent to councillor Paxton Hood- Williams and another councillors following last week's seminar row — was circulated in the chamber.

Referring to the seminar, Councillor Fitzgerald said: "As a point of interest, had councillor David Phillips managed to stop bellowing for just a few seconds, I could have elaborated and advised that what is happening in some European countries is actually long- term contraception, not by using pills or anything that can be missed or avoided, but by implants and similar.

"It is not sterilisation as such, as it is easily reversible."

During Thursday night's debate, Councillor Phillips said it was "contemptuous" of Councillor Robinson and Councillor Fitzgerald to leave the chamber without explaining or justifying their positions.

He called upon council leader Chris Holley to "rid his administration of these extremists".

"They make us a laughing stock," he said.

"It's mad, it's completely insane."

Councillor Mark Child said: "If some people are not good at being parents, or have children without planning to, the answer is not biological intervention, it's social intervention."

Councillors voted to support the motion which said it's unacceptable to express the view that parents of children in care should be prevented from having any more children.

Quite. And as a solution for bad parenting (for unwanted children, actually - but they are too dishonest to admit that) this is rather, well, final...

Whatever else comes of this row, there are two things you can guarantee. First, the mindbogglingly twisted Labourists who suggested these wicked ideas will not be expelled - though expelled they should immediately be. Second, because these self-same Labourists created the swelling underclass that they are now attacking, and manipulated them into the condition of state dependency which requires them to keep voting for the dealer-party, they will never be kicked out of office in that city, something they so richly deserve for the terrible damage they have done.

For Swansea, read a dozen other cities up and down the country. And you wonder why I hate the Labour Party and all that it represents with such a passion...
Posted by Jon Lishman at 8/01/2009 08:14:00 pm