Climategate - The Scale of the International Stitch-Up 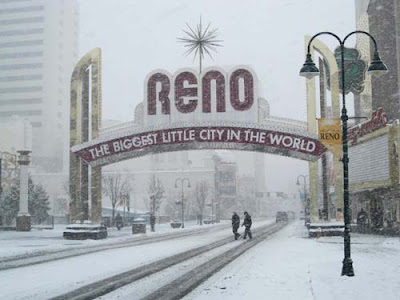 Ah, life. So much to do, so little time to do it. But I can always find time to flag up another emerging revelation in the increasingly appalling (is that possible?) Climategate saga.

This time, we find that former railwayman, "Dr" (of diesel locomotive engineering, lest we forget) Rajendra Pachauri, the head of the Intergovernmental Panel on Climate Change, has about as deep a conflict of personal business interest as it is possible to have, while chairing what is meant to be an independent and objective scientific oversight committee, without being laughed out of the job. The reason, apparently, why he hasn't been laughed out of the job, however, is that his conflict of interest is merely the tip of the proverbial - and truly vast - iceberg, when it comes to the whole nefarious and really rather sinister new industry known as carbon trading.

James Delingpole, naturally, has the story. Read it here - and weep (some more).

Meanwhile, winter storms are hammering much of North America (what, in winter!) and we ourselves are about to experience a pretty significant cold snap (no, you mean in winter! In Britain!! Surely some mistake). There's a multi-meter deep, rich covering of snow all over the ski resorts of Europe, as always (never, in the skiing season!!); glaciers at the poles stubbornly keep on growing and the sea has risen not one millimeter anywhere around this vast globe of ours (as far as we know - it's just about impossible to measure it to that degree of accuracy, remember, in spite of what MMCC, nee AGW, scientists claim).

And yet, the schitzoid media and utterly dishonest government keep on pushing the warmist, Copenhagen, stitch-up agenda, with, for example, Sky News's prepackaged (all the graphics were done long before Climategate but they've stuck with them nonetheless - they were jolly expensive, after all) "Turning Up the Heat" nonsense, complete with big red thermometer and reports from their man going live every night from the dwindling Brazilian rain forest (huh?); and making stuff up about "sunken" villages on tropical islands (the one in question was wiped out by a tropical storm many years back, folks - as they tend to be when they are, er, built along the coast in tropical storm zones) and generally trumpeting as much alarmist propaganda as is humanly possible for one rolling news outlet to churn out. Well, hey, it's all about the ratings, after all.

I could go on, I guess, but what's the point? I'm sure you get the idea, and what an hysterical one it is too. Just please read the Delingpole piece and make your own mind up. Suffice to say, my own view is pretty straightforward by now: climate change alarmism and what is now emerging as "Carbongate" are a global travesty on a scale never before seen. Conspiracy? Not really. Just an unfortunate combination of a basic contempt for the human race and an unhappy convergence of several vested interests, many of them fanatically motivated, all able to rally around the same myth of imminent human destruction (or was that planetary destruction - it's so hard to tell with these clowns). But, as is always the case, the biggest motivation of all for continuing to peddle and push this utter nonsense is, as it turns out, also the oldest one of all: simple greed.