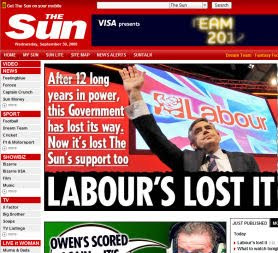 The Guardian's chief political correspondent, Nicholas Watts, has launched a ludicrous attack on Rupert Murdoch on behalf of Peter Mandelson (who else?) that'll appear in tomorrow's edition. There are some extraordinary claims that suggest a distinct and burgeoning paranoia on the part of the Labour Party - (you remember them, the ones that sucked-up to, erm, Rupert Murdoch for 12 years); a familiar, hypocritical stench surrounding Mandelson; and typically ovine support for any old nonsense from his pet newspaper, the good ol' Graun.

However ridiculous the story, though, it's might (ought to) cause one hell of a row, not least with the Tories.

Here are a couple of the more extraordinary claims (supported by zero evidence in the article itself, as far as I can see):

Lord Mandelson declared war on the Murdoch empire today when he accused News Corporation of maintaining an "iron grip" on pay television and warned that the company wants to import rightwing Fox News-style journalism to Britain.

Um, what? I know News International's just announced that it no longer wants people like me nicking their stories (big deal - and fair enough, they don't belong to me, and they're usually naff anyway) but that hardly amounts to an 'iron grip'. As for wanting to 'import rightwing [sic] Fox News-style to Britain', well, no complaints here. It might at least break the monopoly of the biased BBC - and be interesting, to boot. Again, though, Watts doesn't feel the need to substantiate the claim.

In a sign that Murdoch also faces a fight in Britain, Mandelson turned his fire on a joint Tory-News Corp campaign to dismantle the broadcasting regulator, Ofcom.

Again, no substantiation or evidence, just a repetition of an increasingly shrill Mandelson slur about a joint Tory-News Corp 'campaign'. This is the Guardian at its very, very worst in terms of journalistic standards. Have they seen any documents that support Mandelson's bizarre, shrill charges? Of course not. Do they care? Well, if Watts was a genuine journalist he would. But he doesn't so he's not. He's just a mouthpiece for mad Mandy.

But wait, what's this - further into the article? Evidence?

Cameron pledged to dismantle Ofcom during a speech in July devoted to "cutting back the quango state". The Tory leader said: "With a Conservative government, Ofcom as we know it will cease to exist."

James Murdoch, the chief executive of News Corp in Europe and Asia, accused Ofcom in August of imposing an "astonishing" burden of regulation on Sky.

Sorry folks, 'fraid not. For one thing, Cameron made his speech (about quangos) a month before Murdoch Jnr's machinegun assault on anything not Sky (which is sort of his job, after all - to make daddy proud). But still no 'evidence' there. Just more half-baked accusations and the flimsiest of flimsy circumstantial claptrap bordering on a waking dream. And anyway, James Murdoch was right, too! The burden of regulation on broadcasting generally in Britain is outrageous. Oh, unless you're the Beeb of course. Then you can do whatever they like, editorially and financially, despite being funded by a legally enforced tax.

In the end, of course, this is all about Mandelson who, ably served by his tame Guardian journalist, is pushing his ultra-partisan 'Digital Britain' bill, which is actually designed to do just one thing, and its not to secure Britain's digital future (there's no 'we' in Labour). It's to secure the left's control of the BBC from now until doomsday. Well, Pete, doomsday for you could be coming sooner than you think, with or without Murdoch's (junior or senior) help.

As for the Guardian, well, we've long known that its standards of journalism are basically the lowest in the entire legacy press, at least in terms of giving two hoots about even the pretence of impartiality, but this joke article represents an outright declaration of war on the profession itself. No evidence, just mindlessly parroted Mandelsonian smears; no attempt to qualify those claims, just dutifully reinforced prejudices.

I mean, how can it hope to be taken seriously if it keeps on behaving like the BBC? Obviously, we can expect more of this kind of crap as the general election nears, and it should be criticised for precisely what it is: activism and cynicism, not journalism.

The Graun had better remember that the Tories will probably win that election...and that they have long memories.
Posted by Jon Lishman at 12/02/2009 10:23:00 pm