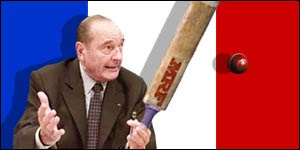 Whatever next! Having played the game virtually all my natural (apart from when I was a Yank-kid) I know that cricket's played in the strangest places. My uncle played for Staten Island CC (NYC Staten Island), of all things, for example.

Cricket is known to be played in Germany (armed forces - there's a lot of clubs, too). Cricket's played on the decks of ships, on ice floes and from Patagonia to Japan. It's even played in New Zealand.

And yours truly, on a tour to the North East, crossed Hadrian's Wall (with some trepidation) and played in the most bizarre match ever somewhere called "Jedforest" (I thought it was "Jed's forest" and wondered who Jed was). 'Tea' was great lumps of meat on huge skewers and cans of McKewans nats' piss. It was one of the few times a decent hot brew would have gone down a treat - it was bloody freezing. I know there are some solid old clubs in Scotland's two large cities, but once you're in the wilderness...they wear kilts! While they're bowling!! Not a pretty sight.

And now I hear from the Smellygraph that it's played in that most hostile of cricketing environments: France. I still haven't got over the time Jacques Chirac in 2002 claimed cricket was invented there .

As the Beeb said at the time:

Only the French would have the gall to try and steal the most quintessentially English of sports. 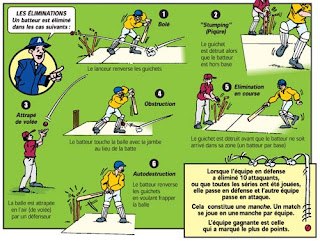 I love French translations of the laws of cricket (see above). In English, ways of getting out are described by apt language that's to-the-point, pithy and never gratuitous or melodramatic. "Bowled", "run out", "caught behind". Even "retired hurt" - unpleasant, but, you know, you'll get over it.

In French, manners of dismissal read like some sort of existential catastrophe. For example, the unfortunate 'hit wicket' in French becomes the rather chilling 'Autodestruction', which sounds not so much unfortunate as permanent and distinctly fatal.

If there ever is (another) test match between France and England, it would be as much a socio-linguistic battle of philosophical ennui as it would be a sporting one. I think the French are just too damn serious for a game that can last for what sometimes can feel like a lifetime. They'd never make it to five days without committing 'autodestruction'.