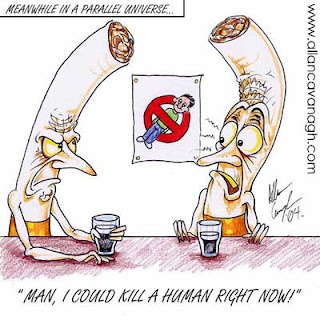 The smoking ban is killing the pub industry stone dead. And for what? So health fascists can feel good about themselves in the only way they know how: by interfering in people's private lives and dictating how they wish to use their bodies. As a lover of liberty, this (still) absolutely sticks in my craw. As a (former) smoker, I do/did not mind one little bit being exposed to the odd thick pub fug now and then. It was all part of the pub atmosphere, so to speak. It was the point.

But who inspired the ugly notion of the 'total ban'? Where does this fanaticism about general health come from? What has happened to the principle that our duty is to usher our young into the arms of Aristotelian moderation, instead of route-marching them straight into the pitbull jaws of totalitarian disregard for the desires of others?

Reading the DT's magazine over a bowl of muesli last weekend Careful research has unearthed the following, disturbing testimony:

Today's theme was that old chestnut, smoking. He would start out with special reference to narrowing of the arteries caused by smoking. How awful a smoker's stomach must look. Smokers lacked consideration for others, forcing them to breathe in polluted air. He had really toyed with the idea of outlawing smoking [everywhere]. The campaign would begin by having a death's head printed on every cigarette pack. 'If I should ever discover,' he often said, emphasising the depth of his antagonism to smoking, 'that [my squeeze] were secretly smoking, then that would be grounds for me to separate from her immediately and for ever.