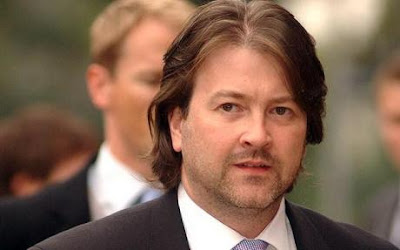 
To have a personal mention from the arch Labour psychotic himself, Derek Draper (applause). I admit he was pissed and using one of his many transparent nom de plumes. But still....I'm damn honoured!

To Denverthen and others (you know who you are):

Your homophobic comments make me sick. I’m actually shocked that in the 21st Century there are still people who have your bigoted, prejudiced attitudes. Do you realise that in most workplaces (including mine), people would get sacked for less?

Why is it that Guido’s blog attracts such offensive homophobia? No-one I know in the real world ever speaks like you. Draper was right when he said this blog is the “sewer” and you people are the “sewage”.

If this continues, I’m going to start compiling a dossier of sexist, racist, homophobic, Islamophobic, and generally offensive language for Derek Draper to post another expose on Labourlist.

Draper is more influential than you imagine - you don’t want him as your enemy. He is persistent and has a long memory. Have you noticed that since Guido started attacking him, Draper has become more famous and successful (e.g. his new book launch, Labourlist growing by the day) and Guido is increasingly marginalised and irrelevant?"

Scary, huh! It feels like I've been picked-on by Eric Cartman. It's that childish. It's that cartoonish.

I recommend you read the thread this is from, btw - just so you can confirm in your own minds that everything he accused me/"us" of there is absolute, fevered, sick, smearing bullshit. You can use that kind of shitty trick against politicians: you can't play that game with the general public. This troubled fool hasn't made the distinction yet. It seems that new technology is too much for the master in charge of Labour blogging. Wonderful.

But be warned: delusionals like Draper never go down without a fight. Look at Hitler!

They'll sacrifice their own families in an undignified egotistical fit of fake victimhood before giving up the political influence they actually believe they own. Permanently.

So. Get ready for the fight!

Post Script:
In my professional opinion as a highly qualified psychiatrist, all the signs increasingly point to the fact that Mr Draper has, in fact, suffered, in layman's terms, a severe nervous breakdown which has led to, technically speaking, a complete psychotic break. He actually believes what he says so all decent people should remember that if he confronts you while he's still at large, you must not do anything to antagonise him. Anything about the loss of the next General Election is definitely a no-no. He will become violent. And then he'll encourage his party to do the same thing. So that's out.

Humour him long enough that he might be captured and incarcerated in a place where he can finally receive the long-term care he desperately needs.

It's tragic, really. But if he fails to seek help soon, who knows what might happen to him. If he's still on the loose and remains disconnected from events, in six or ten months time, he could actually become catatonic as his psycho-political contructs finally diverge completely from the reality that will be a new Conservative Government. (Mind you, "catatonic" sounds pretty good for this particular species. At least it'll be preserved - and silent).

The fun - I mean sad - thing is, of course, for highly trained zoologists like me, is that he won't be the only one to be totally unhinged following that particular overdue, mass castration. Much conservation work to protect ex-Nulab MPs from total extinction will need to be done.

But that's not my field.