All These Polls Add Up, Gordo 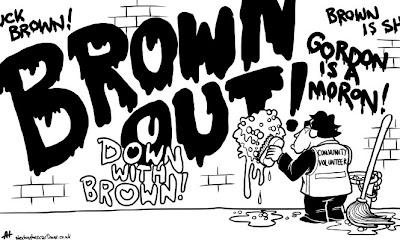 A new poll released by Pupulus puts the Conservatives on 41% and Labour on 27% - not in itself significant, you might think, but taken with all the others by all the polling firms and the numbers add up to a few inescapable conclusions, all of them alarming for Brown.

This the first public survey by the firm since mid-July and clearly the comparisons above reflect that. The numbers are very much in line with all the other firms and show that there’s been very little movement during the summer.

Populus operates in a manner that’s very similar to ICM and, indeed, the firm usually uses ICM call centres to carry out its fieldwork. The main difference is that for its Times polls has a sample of 1,500 which is the largest of any of the phone pollsters.

There’s bad news for Brown - 65% of those interviewed thought that someone other than him would make a better leader.

I'm actually quite surprised by the 65% negative rating for Brown. I thought it would be much worse. It seems that 35% of the population are idiots.

The conclusions, though? The first one must be that Tory support now has definitely become solid. After the expenses scandal and the Hannan/NHS squabble, any damage that might have been infliceted has been completely repaired. Cameron has certainly not "sealed the deal" (a pointless, meaningless cliche anyway), but people to me seem to be resigned to the fact that the only way to kick out this failed Labour regime is by turning to the Conservatives. It just goes to show, no one really votes Tory out of love, they vote for them out of necessity. And quite right too. People trust them to fix Britain's broken economy - they've done it before, after all.

The second conclusion concerns Brown (ah, Brown, you again). His plummeting popularity is certainly a concern, but it is the pattern emerging in all the polls which will concern Labour grandees most. Even the ones technically weighted in Labour's favour are showing signs of shifting towards the Tories. To my inexpert eye, you can add a further three percent to an ICM or a Populus poll if you want to know an election outcome. That's what happened in the locals and Euros - and worse. Labour's vote is so fragile that they are one more Megrahi scandal away from total collapse. That scandal is bound to be lying in wait just around the corner. They have been overtaken by the Liberals before during the early Eighties, but that was at the expense of the Tories. It could be about to happen again. Suffice to say, Brown's position has just become even more precarious, if that is actually possible.

Finally, since this poll was conducted on behalf of The Times, the last word might as well go to it:

No party has ever recovered from being so far behind in the polls at this stage of a parliament to win the subsequent general election.

Opinion has hardened among voters that David Cameron will win an overall Commons majority, now expected by 57 per cent, up six points since mid-July.

The poll is devastating about Mr Brown’s position as leader. Just one third think he is the best leader that Labour could have at present. But nearly two-thirds (65 per cent) believe there are other Labour politicians who would make a better leader than Mr Brown. Some 48 per cent cannot think of anyone specific but believe “literally anyone would do a better job than him”.