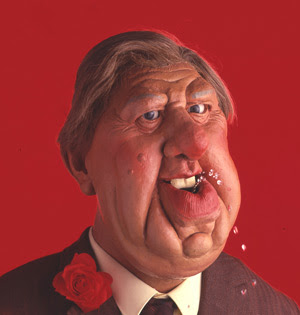 As one of those "hysterical" (as Hattersley generously brands detractors who freely voice their opinion about Brown's abject, unprincipled cynicism) commentators who supports David Cameron's call for Brown to come clean over his government's role in the terrorist-for-oil scandal - although, I cheerfully admit, one who is largely ignored - I felt the urge to remark on the blubbering lefty Lord's Times article. Here's a bit of his hilarious outburst, just so you get the gist of the argument, if it can be called that:

I believe that al-Megrahi was released in the interests of compassion rather than because of fear that, were he to die in jail, Libyan oil supplies would be cut off. That view is supported by the more responsible commentators who only set out the conspiracy theories in order to discount them. But, if it was Britain’s economic health that the Prime Minister had in mind, does the leader of the Conservative Party think that Mr Brown’s priorities were wrong? If so, when did Mr Cameron, and the hysterical commentators who parrot his demands, come to the conclusion that political necessity — the demands of diplomacy, security and trade — should not influence government decisions on whether or not to compromise with terrorists?

Have you spotted the flaw of flaws in these - erm - thoughts? Have you noted the dead giveaway, aside from the fact that Hatstand is endorsing the idea that we should abandon all principles whenever we need the oil? Yes, in the absence of any truth from Brown, he's admitted on behalf of that stain on our society, that blot on our political landscape that Hatstand admires so much what sane people suspect: "...if it was Britain's economic health that the [total moron] had in mind...". And? Let's complete the thought for him: "...when he allowed the deal with Libya to go through, regardless of principle and the blow to our relationship with our allies, does the leader of the..." etc. Truly remarkable.

It seems Hatstand, for once in his sorry life, knows something that we, erm, already know: Brown did the deal!

I suppose Hatstand is one of those types whose foot is so firmly stuck in his mouth that you want him to stay far, far away from your side whether he loves you or not. What a clown.
Posted by Jon Lishman at 9/03/2009 07:02:00 pm