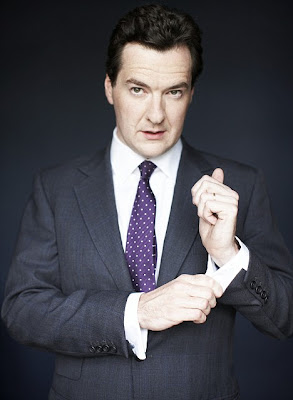 Critical though I have been, almost constantly, of George Osborne since I began to write this stuff, I am happy to admit that all recent evidence points to the fact that I was, in truth, wrong about him. My lack of faith in his ability to engage with the zeitgeist, judge the political temperature and seize the moment was thoroughly weak-willed, it seems. Oh fickle me.

Yesterday was good (today will be better). Osborne railroaded Brown and trainwrecked Mandelson with the devastating timing of that leaked treasury document - and many excellent anti-Brown bloggers explained just how (I didn't). Today he's going for Labour's jugular, according to the DT's chief Conservative party news conduit, Benedict Brogan. Now that he's trumped Labour on the argument, he's going to stick it to them on policy. Public spending and debt levels are a national emergency, he will say, and that calls for an emergency budget. Excellent.

The last time the Conservatives returned to power with an emergency budget, there were no surprises. The Economist declared, "It's what you voted for", while the Daily Mirror said, "No one who voted Conservative can complain". It was 1979 and Margaret Thatcher had prepared the groundwork with a manifesto that addressed directly the twin challenges of the day: "Any future government which sets out honestly to reduce inflation and taxation will have to make substantial economies, and there should be no doubt about our intention to do so."

George Osborne is aiming to do the same again. By the time you and I vote, he hopes to have made it plain as a pikestaff that he intends to introduce sweeping measures to get the public finances back within reach of reason. It may not all be done in that first "emergency" Budget he plans to present within weeks if the Tories are returned, but he will go fast and furious, I'm told. The window of opportunity for doling out the bad medicine is narrow.

Quite what he tells us between now and polling day is another matter. He is weighing up calls for candour against the risk of showing a hand that can be trumped by a desperate Labour Party. He is aware of the need to prove there is more substance to his programme than making MPs pay more for their Commons salad, but is mulling the "how much is too much" dilemma. His conference speech in three weeks' time needs to impress the City with its maturity. He knows he should display the soberness of Geoffrey Howe rather than the showmanship of Derren Brown. It must be the address of a chancellor, and not of his shadow.

Yesterday, though, Mr Osborne was still demonstrating his knack for political coups. He released a leaked document that reveals the Government is assuming spending cuts worth 9.3 per cent between 2011 and 2014. This breach of confidence has had a devastating impact inside the Treasury. Labour exploited leaks in opposition, and is being undone by them now. This one has turned Gordon Brown's retreat from "Tory cuts v Labour investment" into a rout. To have shifted the ground of the political debate while in opposition is some feat. How far have we come if a shadow chancellor can accuse the Prime Minister of lying without provoking even a murmur of outrage?

What to cut is the new frontline in a war of attrition between the parties. But now comes the hard part. The Conservatives are committed to closing the deficit more quickly than Labour, which leaves the shadow chancellor having to explain how much greater than 9.3 per cent his spending cuts will be. As Ronald Reagan said in his first inaugural address: "All of us, together, in and out of government must bear the burden."

But do we even understand what reducing debt and reforming the public sector might mean? Glib talk of axed programmes, redundant civil servants and slashed benefits takes little account of the difficulties the politicians implementing such cuts will face. Vital? Yes. Do-able? Of course. But easy? No, and yet Mr Cameron and his shadow chancellor are being egged on as if restoring us to fiscal health is as easy as 1, 2, 3.

The Conservatives face four obstacles that cannot simply be wished away, the first of which is the public sector unions. Mr Cameron may be trying to seduce Brendan Barber, the TUC's general secretary, but the noises from its conference suggest no takers among the brothers for his olive branch. He is right to highlight the regiments of public sector employees who, like him, believe more can be done for less. But three in five workers in the public sector are unionised, and the BMA can be just as reactionary when it comes to protecting the largesse lavished on its members by Labour.

Then there is the Civil Service. Senior officials are desperate to be rid of this Government – yet, over time, Whitehall has developed its own addiction to unlimited money, coupled with an aversion to risk. A generation of mandarins has grown up fearful of delivering hard truths face to face, and of challenging poor performance. As a result, what a private company would find straightforward – the removal of failure – in Whitehall has become complicated and mired in treacle. Teaching civil servants to address poor performance with the same kind of brusque efficiency that obtains in the private sector must be part of the next government's programme of reform.

Mr Cameron, in his pronouncements so far, not least his promise to go to war with the educational establishment, shows all the signs of a politician who is not afraid to suffer the scars on his back that Tony Blair so famously complained of.

Which brings me to my next obstacle: the politicians themselves. Whitehall is gripped by short-termism, yet in a world dominated by the targets culture introduced by Labour, is this any surprise? When ministers themselves prioritise short-term results that can be ready for the Six O'Clock News or the autumn conference, how can the Civil Service hold out for the long view? Take the permanent secretary I know who was asked by Gordon Brown to deliver a 5 per cent real terms cut in his departmental budget (long before the Prime Minister was prepared to admit such a thing), only to have his ministers – all cronies of Mr Brown – veto every suggestion for shedding jobs, for fear of alienating the militants in the PCS union.

It's not just a Labour problem. Last week, Michael Fallon argued cogently in The Daily Telegraph that the shadow cabinet does not have the faintest idea of the commitment needed to cut public spending, and is still racking up spending pledges rather than offering savings.

And then there's us, and by that I mean the political and media classes of which I am a part. Are we truly ready for reform? What will we make of the grind of austerity, of the complaints from angry constituents and furious readers who have lost a hospital or a surgery, or seen their children refused a university place?

Mr Cameron proposes a long-term project of restraint and reform, but will face resistance, not just from the machine in the centre, or from the demoralised manager of a Leeds benefits office baulking at making a 10 per cent headcount reduction, but from top to bottom, an accretion of human resistance, born of short attention spans, lack of imagination, special pleading, and the siren calls of an economic recovery. How easy will it be for a Cameron government to argue austerity, when others are emerging into the sunlight and thinking: "It's over, why bother?"

Still, I remain an optimist. The public gets the need for "more for less". It's what they have always done, in the kitchen, with the home finances, and in running their small businesses. With the right leadership they can be persuaded to support a national endeavour to spend less and run things better. But it will require candour from government. In 1979, Mrs Thatcher was returned with a majority of 44, not a landslide. Her side wavered and came close to throwing her out when things got tough, until a gamble in the Falklands rescued her. We should not make the next government's job any more difficult by pretending that what lies ahead will be easy.

Great writing, especially the concerns - all of which I share. But once Labour get theirs and are kicked out of power - preferably forever - Osborne and Cameron will be given a free rein, and they'll bloody well need it to overcome those obstacles to which Brogan so eloquently refers. If they are honest with the people from the beginning, then they will. They must be honest.

It's all about faith, you see - the faith I didn't have in Osborne/Cameron initially but am rapidly discovering I now have. From faith comes a mandate; from a mandate comes leadership and strong government. None of these things has Brown ever enjoyed or deserved or, indeed, sought. And that's why he is doomed. The sooner he goes, the better for everyone.

So I say to the inheritor, Osborne: well done! But you must stick to your guns in order to rescue the country from the terrifying, deep, black hole that Brown, thanks to his catastrophic incompetence, mismanagement and world-beating, unbalanced arrogance, has dug for us.

Tories: over to you, then. You've won the argument.