Portillo Doesn't Really Get It - We've Moved On From Brown 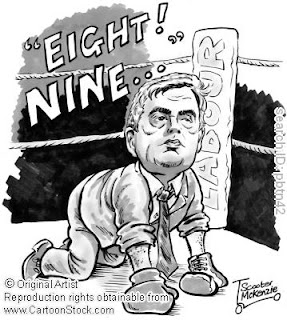 Just been listening to Michael Portillo arguing on This Week that it's in Brown's political interest to 'sort out' the public finances immediately because Cameron's 'inexperience' will somehow then tell against him and Brown's 12 years in office (his 'strength') will suddenly, somehow win him support. This misses a lot of elephants in the proverbial room. For one thing, it is not only the electorate that seems to have collectively moved on from Brown, as even former Brownite, spendaholic economics guru, Anatole Kaletsky, has now acknowledged in the Times, the wider media has too.

Added to this is the fact that there is precisely no evidence to support the idea that Brown accepts the cuts argument anyway, let alone has a firm agenda set for spending controls. He is psychologically, stubbornly opposed to the non-expansionist narrative. His reluctance to admit his errors (and lies) over public spending is testament to this. He has not promised cuts in the way his Chancellor (sort-of) has, he has merely given vague, generalised assurances about efficiency savings and the abandonment of 'unnecessary' and/or 'wasteful' departmental projects - in much the same way as he did in 2005 when he told the same lies to cut the ground from under Michael Howard's feet over the latter's modest proposals, explained in his brilliant manifesto, for an efficiency drive. The idea of genuine reductions in government spending, and bringing the deficit and debt under control, are anathema to Brown. He might have been bounced into using the 'c' word by his own party, but he did so reluctantly and he did it disingenuously. He hasn't changed - and he hasn't really changed his tune.

In fact, I think Portillo knows this and he was actually seeking to make a clever if implicit, disguised point about how boxed in Brown has become, as is always the way with someone who has a genuine problem facing up to reality. The reality is that the electorate have had enough of him, in every possible way. The reality is that he can't immediately start setting the agenda for real public spending cuts because he'll be straying straight into the unmarked political minefield that is Tory economic territory: sound money and the small state. In other words, he won't because he can't. Whether he knows this or not is quite another matter. I think evidence suggests not. That's what the public suspects, too - and that's why he (and Balls with his sudden, bizarre, £2Bn assault on his own department), and Labour generally, have no credibility in this key policy area. Unlike 2005, when debt-fuelled growth and Brown's property bubble were reaching their peak, in 2009 no one's buying the Brownite lies and spin any more. A crash, Gordon, is a crash and the leaders in charge at the time of that crash and the recession that follows will be forced to take responsibility for it - especially if they are responsible for it!

For this and a whole host of other reasons, Brown-Labour has completely lost the argument on public finance.

Add to this the view that, as is clear now from a succession of polls, in the minds of millions of Britons, Brown caused not only the debt crisis but the crash itself and the rampant recession that followed, and there is more than enough evidence to suggest that Labour under Brown is facing total wipeout, assuming David Cameron's Tories don't make cannibalism and the culling of all six week-old puppies owned by small children firm manifesto pledges. Labour's only hope of avoiding this fate is to oust Brown - and November looks like the month. Last chance. Don't they get that?

Regardless of them, we really have moved on - and there are signs the mainstream media is beginning to sense that. Slow on the uptake, aren't they?