The Challenge for Cameron 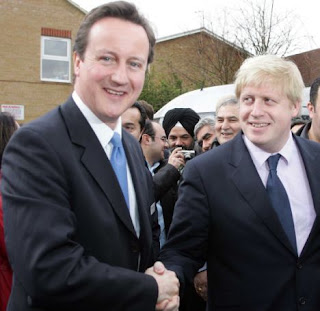 This is what I call top-class political journalism. Clear, cogent, cohesive and devastating. Another journalist seems to have finally understood the true scale of the damage set to be inflicted upon Brown and Labour by a country that has, quite simply, had a bellyful of them. It's worth the read...

They have no idea what is in store for them. Not really. When Labour convenes in Manchester for its annual gathering next September, its members will look back on this week's conference in Brighton as another era, another country, another world. Gordon Brown will be gone, David Cameron will be in No 10, and a new Opposition leader will be telling his or her flock not to despair – or, more accurately, to stop despairing. Factionalism, introspection, recrimination: these will be the hallmarks of the wrecked movement that once carried all before it as New Labour.

But that moment lies ahead. For now, the governing party is too busy ensuring that it will lose the general election to think of what life will actually be like once defeat is in the bag. Charles Clarke pops up to perform his constitutional role as the man who urges Gordon to go, for health reasons or something similar. Baroness Scotland, the Attorney General, is fined £5,000 for employing a Tongan housekeeper illegally – with the magnificent twist that she is in breach of a law she herself steered through Parliament. Baroness Vadera, one of Gordon's closest advisers, quits as a minister. Gordon himself, apparently shunned repeatedly by the President, is initially reduced to meeting Barack Obama in a New York kitchen, thus bringing a whole new meaning to the phrase "kitchen cabinet". The polls strike hammer blow after hammer blow to Labour's morale. David Cameron may not have "sealed the deal" with the public, but Gordon Brown most certainly has.

The entirely predictable corollary of these pre-conference fiascos is epically unsubtle positioning by the principal leadership contenders. Alan Johnson, whose false modesty is now starting to grate, admits that he's "not willing to rule myself out for all eventualities in the future". I'll bet he isn't. In a Guardian profile yesterday, Ed Balls was reported to have mumbled to a seven-year-old who asked "if he wants to be prime minister… that he would, if asked, adding that someone has to do the job". Again: you don't say, Ed.

Meanwhile, in New York, the other Ed (Miliband) told Mary Riddell in The Daily Telegraph yesterday that "I just think for me to start speculating about [the leadership] is a distraction and a bit presumptuous." Another big fat "yes"! Pressed on rumours that the PM might stand down before the election, the best Miliband could muster was: "I don't think that's going to happen. I don't think it would be right. Honestly." Not exactly a passionate oath of loyalty, is it? If I were Gordon reading that, I would mutter "Et tu, Ed?" into my porridge. Or perhaps just hurl the porridge against the wall, as seems to be the Prime Minister's preferred method of expressing mild irritation these days.

Mr Miliband's pre-conference mantra is that "there's no future for Labour in not being a party of the middle classes". This is true – indeed, it is obvious to the point of banality – but it is odd to hear Mr Miliband of all people say it, given that, for the past decade, he has been one of the most outspoken advocates of what he calls "fair taxes". And what Mr Miliband calls "fair taxes" is what the rest of us call "being fleeced" and "having less of our income left to us by the rapacious state to spend on our families". In his interview with The Sunday Telegraph today, Mr Brown claims that Middle Britain is top of his list: "These are the people who I identify with." Again, could have fooled us, Gordon. If the Brownites think that they will win over the electorate by reinventing the Blairite wheel at this late stage, they are in for a shock.

As, indeed, is the whole Labour movement. The shock of defeat lies not only in the loss of power, terrible as that undoubtedly is. A party driven from office must expect a whole array of traumas, great and small. For a start, the political landscape on the morning after the election is utterly transformed, and makes all pre-electoral prophecies instantly redundant.

The sheer scale of Labour's victory in 1997, the consequent tininess of the Conservative parliamentary party, and the absence of Michael Portillo from the Tory leadership race: none of this could have been foreseen at John Major's final conference as leader in Bournemouth in 1996. Most Conservatives knew they were heading for defeat. But it was 22 years since the Tory party had lost an election. It had forgotten the rank smell of failure, the ashen taste in the mouth, the sudden experience of irrelevance.

Irrelevance is at the heart of it all, and it is this that should most frighten Labour as it gathers by the sea. A party in power, no matter how divided, no matter how exhausted, no matter how useless, is still interesting: its exhaustion, its infirmity, its lack of trajectory are important because they affect all of us as citizens. If John Prescott is rude about Harriet Harman, it is a story. If Tony Blair is reported by Adam Boulton to think that Gordon Brown is a "quitter", that's a story, too.

Labour has grown used to the limelight, and has forgotten that nobody has a right to the public's attention. It is a paradox that the longer a Government lasts, even as it suffers cellular damage and approaches invalidity, the more convinced it becomes that its beliefs are obvious, that its arguments are plain common sense, that it does not have to win the battle daily. Philip Gould, Blair's chief pollster, used to quote approvingly the belief of the US strategist Dick Morris that, in modern politics, a government needs a "daily mandate". Plainly, Mr Brown believes no such thing. He exudes only contempt for his opponents and their policies, even though the polls suggest that Mr Cameron's personality and proposals have achieved considerable traction with the public.

The election of a Government does not represent a collective swoon before an ideological blueprint, but something much messier and more numinous: boredom with or suspicion of the other lot, intuitive enthusiasm for what the victorious party represents. That enthusiasm is provisional, probationary, and must be renewed constantly. Labour has completely forgotten this. It believes that Britain is a Labour country suffering a temporary bout of false consciousness. In fact, the opposite is true: after three general election victories, the scales have fallen from the public's eyes.

It will all look so different in Manchester a year hence. But let me predict this much about the week ahead at Brighton: Brown will give a decent speech, better than expected, which will include at least one killer punch (remember "no time for a novice" last year?). He will face down his internal assassins once more. The Labour Party will feel a little buoyed by its leader's determination. Then, it will disperse, go back to its constituencies – and prepare for Opposition.

All I would add is that contained within this piece is an implicit and powerful warning - for Cameron in particular and the Conservative party at large. If you unpack that warning, it might go something like this:
1. Do not take the power you will be lent for granted (again).
2. Do not lie to the people who gave you the job. Respect them by being straight with them.
3. Treat the offices of state which you will once more occupy - and the mother of parliaments - with respectful humility.
4. Seek that "daily mandate" and put it at the centre of your political philosophy.

Democracy is a continuum. Elections are merely the legal and essential expression of the need for a healthy democracy to change direction from time to time. The coming General Election, and the democratic change of direction we all so desperately crave that it will bring, is long overdue.

If Cameron follows these principles honestly and not as some sort of publicity gimmick or disingenuous 'triangulation' (stifling a debate by lying about your intentions, thus elbowing out any genuine antithesis), then there might be room for a glimmer of hope to emerge that British parliamentary democracy can become healthy once more, after the severe damage that has been done to it by years and years of Labour misgovernance and dishonesty and the daily abuses by MPs of every stripe of a system of remuneration that relied on their personal integrity to function.

If Cameron does this, he will have my vote until the day one of us dies. If he doesn't, he'll have one term and then, well, we'll need another "change of direction". We'll kick him out and continue our long, long search for a decent prime minister. (We might even give Boris a try!)