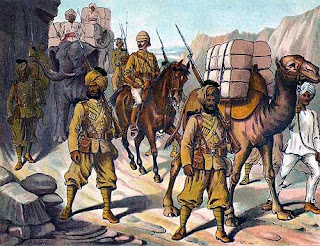 Brown: "Supplies Getting Through"
Mediocre BBC politics pundit Nick Robinson, of whom I generally think very little, misses the point entirely, as usual, about the problem with Gordon Brown.
The latest rumblings about the underfunded, underequipped and understaffed mission in Afghanistan (what was that mission again?) caused by the resignation of some Scots trougher MP and ex-tartan Rupert called Joyce, in response to the smearing of senior officers among many other things (like that total moron, Ainsworth, being promoted over his head by Brown), have nothing to do with Brown's "leadership of the war effort", as Robinson (not the Sun) characterises it, but everything to do simply with Brown's leadership - period.

The resignation of a junior ministerial aide would matter little if it weren't for the fact that Eric Joyce is a former army officer and is echoing, in public, concerns and criticisms many in the military make in private. Fortunately, for Gordon Brown, he has a speech already written as a reply to his critics.

The prime minister is much more worried about losing the backing of the military, and of papers like the Sun, which have attacked him for showing no leadership of Britain's war effort - than he is of losing Eric Joyce. He is most concerned though about losing the argument.

Today, he will try to convince his own MPs, the military and the public of the value of his war mission, to describe what success looks like and to prove that our troops are not being left under-resourced.

If he does not begin to do that, he has a much much bigger problem than the resignation of a junior member of his defence team.

Not so, and Joyce's own letter did not really make the point very well either, though I am certain that he wanted it to. Brown's "bigger problem" is the most fundamental a leader can have: no one thinks he can lead. Today's speech, if it is the same, pre-written one as Robinson claims it will be, will merely further confirm how inflexible and convinced by his own sense of righteousness, but at the same time, moved by dishonest and unprincipled pragmatism and total, paranoiac insecurity Brown is. So full of contradictions and serious character flaws is this man that leadership of a MacDonalds would be a severe mental challenge for him. Leadership of a major Western power (let alone during a war)? Exactly!

But that, folks, is our Prime Minister. I don't think the troops will be paying much attention to him, unless he's planning on announcing his resignation. Do you?
Posted by Jon Lishman at 9/04/2009 12:12:00 pm