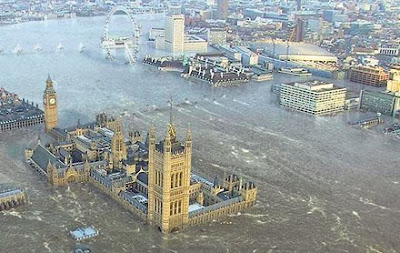 Boy, that didn't take long, did it? The warmist propaganda machine is now going into overdrive to try somehow to repair the damage of Climategate on the eve of the Copenhagen summit waste of everyone's time and our money.

This article will be splashed (ho ho) all over tomorrow's Times newspaper with its IPCC lala land "warning" that sea levels are going to rise by a thousand feet in six months unless we all commit suicide tomorrow (actually, it's only 60m according to arch AGW loon, James Hansen but let's not split hairs here, right?). All over the world, search engines have been doctored and large sections of the MSM has done all it can to bury the biggest scientific scandal of the modern era. Now they're moving into the next phase - Operation: Scare the Shit Out of Everyone. Lo and behold, here's their first offering, complete with tame German professor and a peer reviewed analysis (peer reviewed using the CRU, "have you hidden the decline?" approach, naturally) revealing new, devastating results of - well what, exactly? Something that might happen if a whole bunch of other stuff happens, based on models that tell them what should be happening - but isn't. Top research. Stop press. Cue banner headline. It's a scoop!

Sea levels will rise by twice as much as previously predicted as a result of global warming, an important international study has concluded.

The Scientific Committee on Antarctic Research (SCAR) calculated that if temperatures continued to increase at the present rate, by 2100 the sea level would rise by up to 1.4 metres — twice that predicted two years ago.

Such a rise in sea levels would engulf island nations such as the Maldives in the Indian Ocean and Tuvalu in the Pacific, devastate coastal cities such as Calcutta and Dhaka and force London, New York and Shanghai to spend billions on flood defences.

Even if the average global temperature increases by only 2C — the target set for next week’s Copenhagen summit — sea levels could still rise by 50cm, double previous forecasts, according to the report.

SCAR, a partnership of 35 of the world’s leading climate research institutions, made the prediction in the report Antarctic Climate Change and Climate. It far exceeds the 0.59 metre rise by the end of the century quoted by the Intergovernmental Panel on Climate Change (IPCC) in 2007. This was based on a “business as usual” approach by governments that allowed temperatures to rise by 4 degrees. It will underpin the negotiations in Copenhagen.

SCAR scientists said that the IPCC underestimated grossly how much the melting of the Antarctic and Greenland ice sheets would contribute to total sea-level rises.

Well at least the authors of this report had the sense to use the suitably hedging conditional "would" instead of the usual, hysterical 'will' of AGW fanatics. (And if the sun exploded, we'd all get pretty warm very quickly, right?) Mind you, they had little choice on that one, as this comment on a Telegraph blog (well known climate change activist's, Will Heaven...erm) points out:

Quite aside from that is the fact that all those millions of square miles of frozen Arctic water is floating on - um - more water, which, as everyone knows (don't they?), kindergarten physics tells us would not cause sea levels to rise millimeter-one if it was all boiled into the sea by a really quite humongous blowtorch tomorrow. But, you know what? Little things like demonstrable, reproducable scientific knowledge really doesn't matter any more. Climategate has demonstrated that we're not really dealing with science here at all, be it kindergarten or otherwise. We're dealing with a ruthless and ongoing deception.

This Times article, with its now all-too familiar end-of-days, alarmist propaganda mixed in with suspiciously timed, dodgy science reports and interviews with the usual suspects from the IPCC (Dr Rajendra Pachauri, chairman of the IPCC, is a former railway engineer for God's sake) merely serves further to demonstrate that while the blogosphere remains free (for now), the increasingly schitzoid MSM is basically in thrall to the prophets (yes, I agree, that should read "profits") of doom. In point of fact, the manner in which the report ends seems to prove my point (about the schitzoid nature of the legacy press).

Sceptics seized upon his figures as further evidence of the unreliability of climate change predictions.

“It’s 50cm, 60cm, 100cm — 60m if you ask James Hansen from Nasa,” said Benny Peiser, director of the Global Warming Policy Foundation . “The predictions come in thick and fast, but we take them all with a pinch of salt. We look out of the window and it’s very cold, it doesn’t seem to be warming. We’re very concerned that 100-year policies are being made on the basis of these predictions”

I suppose they would call that balance, but the use of the warmist term of abuse "sceptics," (euphemistic codespeak for the vicious slur "denier" and/or the debate-killing "crank"), instead of the usual (and balanced) "critics" suggests to me that at the very least - and this is a generous conclusion - post-Climategate they simply don't know how to frame this issue any more.

They don't know, I don't (really) know - and neither does the IPCC or SCAR or the rest of the AGW industry.

But the difference is, one of us isn't being honest, and Climategate has shown us all who that is.

==Update==
Past my bedtime, but I've just seen this hilarious comment by somebody calling herself (I presume) "Auntie Mavis" under the Times scare story in question:

jim king wrote:
"1. Put a large ice cube in a glass.
2.fill it to the brim with water.
3.The ice cube will protrude above the surface.
4.Wait till the ice cube melts
5. In the doomsday theory the scare mongers would have you believe the protruding ice that has now melted will over flow.
6.It never will because ice displaces it's own volume.
7. When water freezes it expands.
8. So the reverse happen's when it melts
9. Simple school boy facts."

Now do it with the ice on top of a column of concrete with the water level up to the top. Watch the water flow over the top when the ice melts.

You what? This uber-hoon really seems to believe that someone - or something, perhaps - dropped a trillion trillion tons of ice on top of the sea at the polar ice caps. Mind you, she's probably an A-level Physics teacher (though fairly new to the profession - and the subject - it would seem) given that she appears to know more about all powerful space aliens that like to drop huge lumps of ice on unsuspecting, mostly harmless, planets, than Archimedes' principle.