Who Will Fire David Laws? 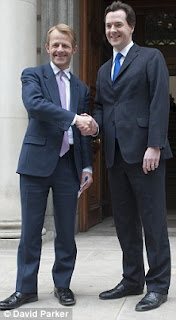 Shaping up as a half-decent, expensively-educated, millionaire Chief Treasury Secretary though he might have been, I'm awfully sorry, but David Laws' political arse is grass. He can't argue the case for public spending cuts when he, apparently, has been pretty happy to sponge off the state on behalf of his partner for the longest time.

So the only question to me is: who will fire him? His party leader, Clegg, or his boss, the Prime Minister?

My view? Cameron must pull the trigger immediately because what Laws did particularly is just the sort of troughing, fiddling, pocket-lining, venal rule-bending Cameron has been condemning in principle and often for over a year. He fought the election on that platform, for heaven's sake!

Frankly, Laws fired himself the moment he chose not to reveal any of this as being a potential problem to his boss before he was appointed (I do not for one moment believe he didn't realise or didn't understand the rules - in fact it's surely hard to believe that of a double first Cambridge economist - and it won't wash regardless, even if he sticks to that lame line).

But who to replace him? Well, how about John Redwood? I think it's high time Cameron picked someone like him for the cabinet anyway. Besides, he's much smarter and more experienced even than Laws in many ways, and genuinely believes and can explain the Friedmanite solution to Labour's debt crisis that we now so desperately need. He'd also be a handy bulwark against the economic mixed brew that is Saint Vince and his presence would vastly help to shore up the Tory back benches. A win-win scenario potentially, then, both for the party and, in my humble, for the country.

Oh, and sucks to the bloody Lib Dums. They can either suck it up and stay in government, or they can destroy this blessed coalition in a fit of indefensible pique.