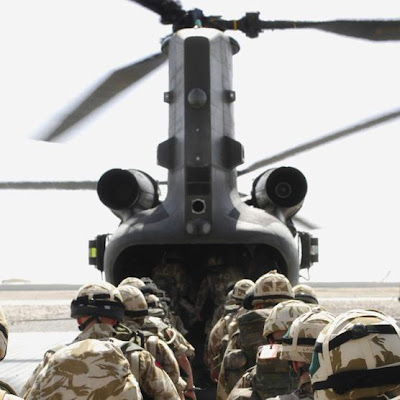 A rare sight in Afghanistan

I must have missed the launch of this new web channel but it seems to be up and running now. Its purpose appears to be to disseminate, decode and discuss the Labour party line on, well, just about everything. The new outlet has its work cut out, though, because that Labour line changes at the drop of a hat (or should that be a shrapnel-damaged infantry helmet) in these dying days of a government beset by paralysis and held hostage by the constant unravelling of years of its lies.

BBC Labour's latest offering is a case in point. A report about helicopters has appeared this evening, presumably written to disseminate, decode and discuss the evil Brown's latest bout of lying about the state of our army - you know, that underequipped force of brave young British men currently trying to contain a fearsome enemy in the arid, alien cauldron of Helmand. It doesn't seem to think it needs to bother to mention the views of senior officers like Sir Richard Dannatt who in their expertise have judged that British soldiers are dying because of a critical lack of troops and a scandalous shortage of key equipment - like helicopters. Then again, that's not the remit of BBC Labour. It's not there to report the truth. Its job is to support Brown at all costs, even if that support flies in the face of reason, insults the intelligence of the British public and is biased to the point of absurdity. None of that matters. So the articles and the clips just keep on coming, with scant regard for the anger of a public that knows and can see the effect of Brown and Labour's hopeless, murderous ineptitude. But, hey ho. We just pay for it all.

But this one is extraordinary. Thinking that by referencing the bizarre opinions of a couple of ex-military duffers (Amyas Godfrey, RUSI associate fellow, for example) no one will spot her hideously Labourist political agenda, Maria Jackson (for she is the I assume expert BBC Labour journalist responsible for it) proceeds to make the most sickeningly dishonest case against the need for more troop transport helicopters ever heard. Most of the report simply follows the government line that the lack of helicopters is not to blame for troop deaths - which is a wicked falsehood. But it's the end of the piece that turns the stomach the most:

The government though says it has made efforts to boost its fleet.

Six Merlins, which are medium-weight troop-carrying helicopters, have been bought from Denmark and are expected to be operating in Afghanistan by December.

Defence officials say there are also plans to spend £2.5bn upgrading more than 200 helicopters and £3.5bn acquiring about 120 new ones over the next 10 years.

However, in stark contrast to Britain, the US reportedly has 120 helicopters in Afghanistan.

Mr Codner puts this down to the US's much larger defence budget and the fact they have made a bigger commitment in Afghanistan.

Mr Godfrey says it is also to do with a different ethos.

Ever since the Vietnam war, the US wanted to create an "air cavalry", whereas that was never a goal for the British army, he explains.

You might not think the spin here is particularly bad, especially since it appears to be supported by a pair of rentaquote militarists. If you do, you are as wrong as the evil Brown and his lethally incompetent coterie. Why, exactly, do the Americans believe 120 troop transport helicopters are the minimum requirement for 8000 marines? Because that's just what it is: the bare minimum. Assuming you want to remain a superior, more mobile and vastly more efficient fighting force than the enemy, and assuming you wish to protect your personnel from unnecessary danger wherever possible, that is. And their strategy is borne out by the casualty count in the recent operation there. UK: 15+ dead and umpteen wounded; US, nil and nil.

I guess Brown and his lickspittles at BBC Labour think those deaths are a price worth paying for keeping Blair's war cheap. The men on the ground use American cast-off equipment, eat American food and use American showers. They have been turned into a second class army and they find it humiliating. But they suffer this government's abuse of the covenant in dignified silence and get on with fighting for each other, for their country and for freedom. That they have to put up with BBC pro-Labour propaganda as well is just too much. They might be too professional to speak up about it (although a quick peak at the squaddie boards tells rather a different story), but we don't have to be.

If you have a blog, bloody well get angry about it and demand that this most treacherous of governments is brought down - taking its broadcasting arm with it - and that the next one, whoever forms it, either gives our troops the equipment it needs to prosecute its campaign immediately or brings them home and suffers the consequences of the national disgrace that that would cause.

Labour got us into this appalling mess, it must fall to a new government of integrity, vision and not some sort of fake "courage", but simple, old-fashioned bottle, to get us out of it.