Darling Flexes Muscles He Never Knew He Had 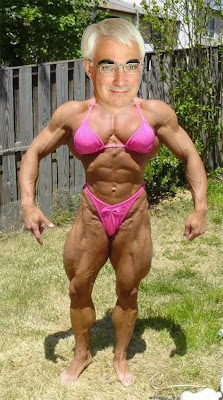 Though flabby and out of condition, Alistair Darling is flexing his newly-found political muscle, it seems. I wondered whether he would actually try to run his own department at some stage, especially now that his position is basically unassailable after he gave his former friend and boss, Brown, an ultimatum about Balls' attempts to steal his job.

However, due to the fact that this Labour government is so extraordinarily directionless, talentless and rotten to the core, the instant consequence of Darling's inevitable move to reverse the ridiculous VAT cut - the most ineffective and expensive tax break in history - is to split the cabinet, or so the ST has just said. It would be hilarious if it wasn't so tragic. Here are the key bits:

His comments [about reversing the VAT cut] come just two days after Harriet Harman said the planned rise from 15 per cent to 17.5 per cent on January 1 was "under review".

Ms Harman, speaking in the wake of the Daily Telegraph's campaign to postpone the increase, said the Government would be flexible about VAT – a move that was welcomed by business groups.

Leading figures in the retail and hospitality industry, including Sir Philip Green and Sir Stuart Rose, have argued it will be an "administrative nightmare" to implement the change not only on a Bank Holiday, but also at the busiest time of the year for restaurants, hotels and shops.

However, Mr Darling publicly "slapped her down", according to a Treasury source, after he made clear the reverse in the temporary cut was still set for the New Year.

Talking on the BBC's Andrew Marr Show, he said it would "definitely" return to its original higher level of 17.5 per cent in January

"...when you consider that it costs almost about a billion pounds a month, I was quite clear at the budget and clear when I announced this last November that the VAT rate would return to the 17.5 per cent at the end of this year. Now that remains the case," the Chancellor said.

It is understood that he was upset that Ms Harman, deputising for the Prime Minister, who in on holiday, spoke on tax matters.

In the Marr interview this morning, Darling also tried to shift the blame for the government's mishandling of the economy back onto banks that are still not lending to businesses, despite Labour assurances last year that this would not happen. Given that the Treasury's own new rules for the banks, which demand that they have double the capitalisation that they could work with previously, and mean they have no option but to hoard QE and bailout cash, it seems rather dishonest of Darling, muscular or otherwise, to try to offload responsibility for his and his governments' hopeless incompetence over loan guarantees onto bank boards hand-picked by him! No more than we've come to expect, though, I suppose. Meanwhile, through all the lies and bluster, thousands of businesses and hundreds of thousands of jobs are being lost in what is a truly horrific downturn - and which could be rapidly turning into a full-blown depression.

While that might be another story, it's all part of the same problem: bad government. The fresh split and the "bad" bank behaviour provides further evidence, as if more were needed, that this government, with its constant infighting and loser leader is completely paralysed. The country needs a united government with a proper mandate to act. It needs a general election far more now than at any time in the post-war era.

You see, Darling might have muscle now, but he has no authority. No-one in this government has - and none moreso than G. Brown, who, laughably, remains our Prime Minister. This really is a crisis, even if it might not feel like one. Remember, though: it never does until it's too late. The clock is ticking on the timebomb that is a sudden and huge acceleration in unemployment, which is where all this is heading.