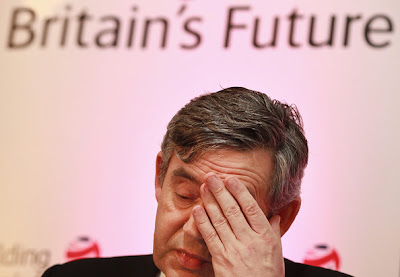 So says Matthew D'Ancona in a refreshingly clear-sighted piece of commentary in the Sunday Telegraph. The chief problem, (as if it needs mentioning)? Gordon Brown, whose detachment from reality appears actually to be growing as Britain slides further into recession and debt. Anyway, here's a few choice morsels. Labourists in particular would do well to take note.

Sequestered in an economic and political Neverland of his own devising, surrounded by a dwindling coterie of sycophants, with a very angry chimp called Balls, Wacko Gordo lives out the last months of this Government in a world of his own. He talks about his upcoming "General Election" tour of Britain as his big comeback, and about his exciting plans for a "zero per cent rise" in public spending. Staring at their shoes in embarrassment, Wacko's Cabinet colleagues wonder whether he will even make it to the comeback trail.

NB: There will be some who think the reference to the recently departed singer is in poor taste. I'm not one of those people but I would understand how some would be offended. Michael Jackson was never as weird as Gordon Brown.

Anyway, on with the show...

For those on the Labour side who are still thinking straight – more than you might suppose – the greatest frustration is that the Prime Minister is squandering a serious political opportunity. Take it as a given that the recession and the extent of public debt mean that we are entering an era of spending cuts. Assume that the electorate knows this, and is waiting anxiously and irritably to discover where the axe will fall, as it must. And then (if you are the Labour Party) insist that only the centre-Left can be trusted to make such savings: that its motives are decent; that it gives priority to the vulnerable; that it can be trusted with frontline services such as the NHS and education. Let the cuddly progressive wield the scalpel sensitively, rather than the nasty Tory with his brutal scimitar. Well, you can imagine the script

There are plenty of reasons, of course, why such a message might not gain traction. Labour has lost its once-solid lead on the economy and economic decision-taking: an achievement for which George Osborne gains insufficient credit. In "decontaminating" the Tory brand, David Cameron has drastically changed the public's perception of Conservative motives. All the Tories' private research show that he himself – if not the party as a whole – is trusted as a prospective custodian of the NHS. Worst of all for Labour, the electorate is self-evidently bored to death after 12 years of the governing party.

Not half, pop-pickers. D'Ancona then goes off in a different direction for a few paragraphs, describing, rather bizarrely in this reader's humble, how Jon Cruddas has become "the most intelligent tribune of the Labour Left, who argues for an "austerity socialism" rooted in the values of R H Tawney." So, Christian socialism all round, then. I am not as convinced as the author seems to be about the authenticity - indeed, the sincerity - of Cruddas' missives. For one thing, this "socialist austerity" to which the latter refers sought to solve the problem of the economic crisis of its day with a vast, enforced redistribution of wealth.

If Cruddas is advocating punitive taxation and an expanded welfare programme, and the nationalisation of industry, then he should say so. The fact that Mandelson apparently supports the idea in principle strongly indicates that this is no more than a gimmick, the sole intention of which is to wrong-foot a Conservative party that has won the argument on how to manage a ruined economy. For that reason, they will win the next election (stupid emails to supporters notwithstanding). Thanks to Brown's inability to be straight with himself, let alone with the electorate, about anything - ever - Labour's last chance has now gone.

I will leave the rest to D'Ancona, who sheds a small amount of fresh light on the Balls Affair and concludes that Brown is incapable of grasping the truth that he will never be elected Prime Minister because he is a liar, and the truth that his resignation is now long overdue.

Mr Brown's promise at PMQs of a "zero per cent rise" may indeed have been, as he claimed, a slip of the tongue. But as with his other alleged "slip of the tongue" in December – when he claimed to have "saved the world" – one is inclined to see Freudian forces at work. Just as he probably does believe that he has personally saved the planet from financial disaster, so it is axiomatic to Gordon, an article of faith, that spending rises under Labour: if that rise is zero per cent, so be it. A rise of nothing is (in the strange Brownite univer 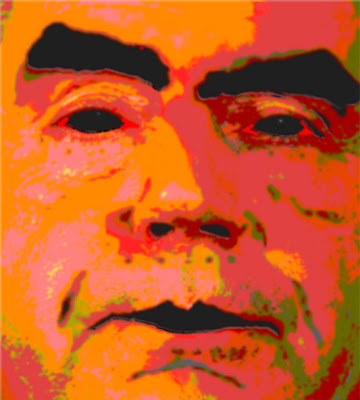 True, the PM shifted his position ever so grudgingly in an interview with the BBC's Nick Robinson on Wednesday, conceding that there might be "efficiency savings" involving bureaucracy and administrative costs such as Tippex ("If these programmes are cut, then that's fine"). But there is much more work to be done if Brown is to be forced out of the comfort zone he occupies with Mr Balls, in which bad Tories "cut" and good Labour politicians "invest": forever and ever.

The manic quality of this conviction was brought home to me last week when the Spectator's political editor, Fraser Nelson, filed a post on our Coffee House blog that accused Mr Balls of telling porkies. The Schools Secretary had said on the Today programme that there would be "less debt" thanks to Government policy – which is obviously nonsense. He proceeded to phone Fraser and myself, demanding that we "take the post down". I offered Mr Balls the chance to rebut the claims online, but he was not interested. Only total obedience will do with this lot. Funnily enough, as power drains from them, the more megalomaniacal they become.

There is a halfway decent Labour message to be deployed at the next election. Brown might pay lip service to it occasionally. But his heart will not be in it. Why? Because once a man starts doing the political equivalent of sleeping in an oxygen tent, and living in a theme park, and hanging out with a chimp, there's not much you can do for him. Especially when, deep in his heart, for all the wretchedness, and for all the misery, he still believes the crowd are longing to see him moonwalk.