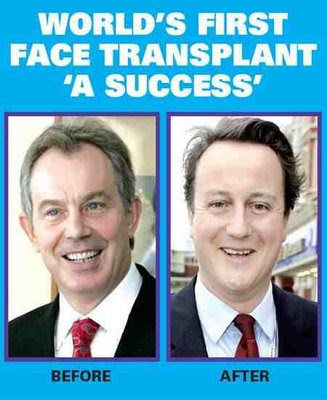 Jeez I hope this isn't true. One was enough!
Not sure what to make of these increasingly chummy, increasingly annoying emails I'm getting from the Conservative Party these days. I quite like the personal touch - it isn't a new idea and it can even tickle your ego a little bit if you suspend your disbelief for a moment. But there are a few problems with this latest one. There's only so much a fake register can bear. Well, see for yourself:

I hope you've had a good week, watching Wimbledon and enjoying the sunshine. I've had a really fast-paced few days, giving an interview for Helen Newlove on her new radio station, delivering a big speech at the Local Government Association conference, and doing everything I can to get Gordon Brown to be honest about his spending cuts.

But one of the most important things that happened this week was the Conservative Party's Social Action conference. It's hard to imagine us holding this kind of event three or four years ago. But social action is now a big part of the Party and it's got a really important role to play.

There are around 150 Conservative-led projects up and down the country. These aren't token PR efforts - they're tough, useful and important schemes which make a real difference to communities. We've got mentoring, sports, and environmental programmes here in Britain, as well as development projects planned for the summer in Rwanda, Sierra Leone and Srebrenica.

It's my hope that the social action undertaken by the Conservative Party is the start of something much bigger in terms of changing the way we do politics in this country. It's about making politics relevant, inspiring new people to get involved, and showing that by working together, we can deliver real change.

Have a great weekend.

Really, I just don't know what to make of it. It reads like some weird mutation of a letter home to the parents. I had no idea I knew the man so well. I had no idea he knew I'd watched a bit of Wimbledon and enjoyed the sunshine this week. It's a bit creepy. How does he know these things? I need to know! Whoa! Slow down there. Remember, the tone is fake. It's just a circular. You're just one of millions on some Tory mailing list to get it. Relaaaaax.

Fair enough, but I tell you what, though, the neo-Blairite syntax is irritating, too, as is the vague, generalised, slightly pleading politico-speak ("social action is now a big part of the Party and it's got [sic] a really important role to play"/"changing the way we do politics [sic] in this country". Sheesh. Not good.)

Maybe it's his "have a great weekend" (which makes him sound like some American checkout girl in K-Mart: "You have a nice day, now") at the end that really triggered my ire. See, I'm going to be stuck inside working like stink on preparation for teaching pre-sessionals all Saturday and all Sunday. So the cheery optimism and simulated bonhomie was, perhaps, lost on me. My fault, then.

No, dammit, it's not my fault. I don't know this man from Adam and I was totally underwhelmed by the letter's overly-familiar, dumbed-down claptrap about the Tories "social action" window dressing. And that's all it is: touchy-feely mood music designed to win over the Blairite middle classes. Newsflash, Dave. You won them over a long time ago. You know, when Brown's superbust began. They're now asking (as am I) "What the hell are you going to do about a bankrupt country that that bloody unelected liar and total incompetent, Brown, has driven into the ground?"

I'm not your mate, Dave. But I will vote for you because I have to believe that a Conservative government will rescue Britain from Labour's catastrophic period of office once more, like it did under Thatcher. But it's high time you and your people grew up and got serious. Start talking to us about economic substance, not about the weather, Wimbledon, creches in Rwanda and my weekend.

Suffice to say, one more, Delta-minus effort like that and I believe I will be excusing myself from the party mailing list, permanently. So get it right next time, if you please.