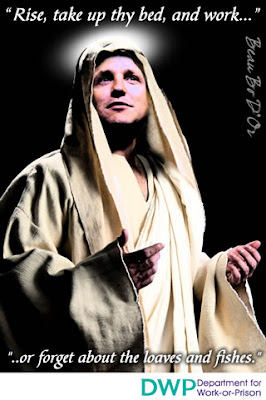 There comes a time in every young man's life when he realises he will never be Prime Minister. It seems that time has not yet come for James Purnell, who, it can now be confidently speculated, harbours not-so private ambitions to take over the salvage operation of the heavily damaged Labour ship, rudderless and drifting, after the final electoral salvoes blow the remainder of its current, clueless crew out of the water, probably in 2010, but maybe sooner. His plotting is misconceived, in my view, however, since the fault lines running through the Labour Party are so deep these days, it is quite possible it will cease to exist in its present form after it is destroyed in the GE. It's impossible to lead a party in a state of civil war - and certainly no fun at all.

Yet there seem to be quite a few Labourists ready to take up the challenge, one of whom is Purnell. But hoping that some sort of unifying "Purnell Effect" will pull the many claques, cliques and factions into a coherent body seems to me to be just another woolly-headed pipe dream. For one thing, where is there any evidence that Purnell isn't just another bog-standard Nulab intellectual lightweight? Apart from his resignation from Brown's cabinet, that is.

No matter how much he might want it, he's not up to the job. Let's hope he gets it, then. I can only assume that the recent outbreak of Purnell-worship in the right press is in fact a product of this ulterior motive: to sabotage Labour for a further decade by encouraging it to elect a twit like Purnell as its post-apocalypse leader. Otherwise, it's just journo-luvvie, village nonsense (and if we've come to expect that kind of crap from the Telegraph, I for one demand more from the Spectator).

Despite all this, it just goes to show how paranoid they've become that the Brownite faction is in a right old tizzy over Purnell's manoeuvres, with over-rated lunatic Edward Balls last night launching a radarless exocet in his direction (which, it seems, failed to explode as it impacted harmlessly on the Daily Telegraph, to the sound of general hilarity in camp Purnell).

“There are times when individuals in their early 40s have crises. They buy motorbikes or go off and travel round the world and have a gap year. Sometimes people do that. I don’t think for political parties to have those kinds of moments is very sensible, especially when you are at your moment of greatest clarity and vision.”

He says now is not the time “to be going off to think tanks to find out what your identity really is”.

You would think the particular claque that Balls leads, however - let's call it the "Gordon for World Emperor" brigade (I don't want to exaggerate) - would steer clear of the word "crises" given that they seem to attract, create and mishandle them at a rate which defies all analysis. As for "clarity and vision" - well, it's difficult to know whether to put my fist through the monitor in fury at the sheer scale of the mendacity, or to seek medical attention for uncontrollable laughter. Best stop reading Balls' bollocks for now, then.

What an outburst like Balls' usually proves, however, is that Brown's rating on his (unique) vulnarability meter has just ticked-up several notches after his complacent reaction to the Norwich North fiasco failed miserably to strike the right note of contrition and regret his fearful party required. The real Purnell effect, therefore, is that he's acting as a defective lightning rod for criticism of Brown. Instead of that criticism earthing harmlessly through him, it's become a focused, million-volt discharge crackling all over the Number 10 bunker and short-circuiting all the low-grade robots like Balls which dwell therein. Brown is unprepared this time for the kind of summer storm he barely weathered last year.