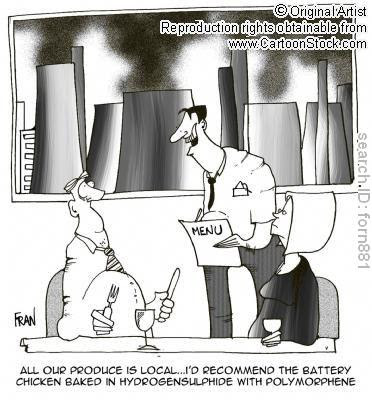 Heard on Radio 4 this evening coming home through the inevitable post-deluge traffic jam that organic food is no healthier than - um - non-organic(?) food. I have to admit, I was a little surprised to hear this after so many years of being reliably informed the complete opposite is true. 'Wherefore came this new (old) "knowledge?"' quoth I. (I think like that when I'm bored, you see).

Setting aside seemingly redundant adjectives for a moment (isn't all food 'organic'?), when, exactly, did insecticides/pesticides/chemical fertiliers suddenly become something other than potentially harmful to human health? I italicised potentially (twice now) to emphasise that that is the whole point: nothing has ever really been proven either way in the organic-inorganic battle, especially that weapons-grade ammonia-based fertilisers (you know, the stuff the IRA blew-up Central London with in 1996) was now completely and utterly safe to consume - and officially, no less.

I'm not gonna get into all that stuff now, though. Suffice to say, this report was released by the FSA. Now what the Financial Services Authority thinks it's doing commenting on something that's clearly way outside its remit is beyond me. Surely it should stick to its own territory: utterly failing to do its job regulating banks. What's that you say? It's the....what? The "Food Standards Agency".

Ohhh. I see. So, unlike the FSA (Financial Services Authority), a quasi-autonomous non-governmental organisation created in 1998 by Gordon Brown to oversee the total deregulation of the big banks - which is what the big banks wanted - and to lie about it afterwards, the FSA (Food Standards Agency) is a quasi-autonomous non-governmental organisation created in 2000 by - erm - some other Labour moron, to sell the government line (which also happens to be the big corporation line, surprise surprise) on food production and then lie about it afterwards. They couldn't even be bothered to give them different acronyms. Sheesh.

I mean, you know: what difference would it make? They neither of them could do any worse at the other's job, could they?

I wonder what the government line on free range is these days. This lot will probably end-up banning it as 'elitist' - like grammar schools! Put all our little children in sinking comprehensives and all our little chickens in stinking battery farms.