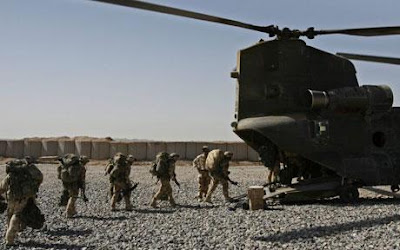 Jeff Randall's done it again. He's put into straightforward terms what we all want to say, this time about Brown's bloody responsibility for the deaths of young soldiers in Afghanistan. Randall's conclusions are inescapable:

...it is unthinkable for the mission to be run on the economics of Aldi. Defence is not like transport or housing. In a theatre of war, pinched pennies cost lives. If British forces are to be deployed as global policemen, they must not be undermined by Treasury bean counters, determined to put the brake on the state's runaway debts. The death of even one British soldier through lack of proper funding is a cause of national disgrace. Ministers responsible should be ashamed of themselves.

How Mr Brown can tell the Commons that recent losses had nothing to do with a lack of helicopters – and still sleep at night – is a mystery. The moral compass he was given at Kirkcaldy High School has gone with the spin.

Yesterday's report from the Defence Select Committee exploded the Prime Minister's self-justifying twaddle. Referring to the Army's capacity to protect troops while carrying out operations with current equipment, it concluded: "We are troubled by the forecast reduction in numbers of medium and heavy lift battlefield helicopters, which will make this worse."

Jack Welch, the legendary boss of General Electric, believed: "Insecure managers create complexity." This applies equally to political weaklings. Mr Brown would have us believe that the challenges defining our military presence in Afghanistan are devilishly difficult to understand. Actually, they could hardly be simpler. We must either pay up or pull out.

As for Randall: his column should be compulsory reading for Tory policy makers - and it should, as Randall says, make Brown Labour and its shrinking base of bovine support, thoroughly - utterly - ashamed. Of course, it won't - and that should tell decent people everything they need to know about them.