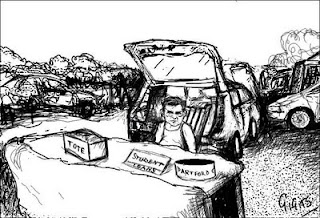 So Brown has announced a £16Bn fire sale of a few assets because, as he so very convincingly put it, "we need a deficit reduction plan that supports growth and jobs not one that snuffs out recovery before it has started."

It's quite difficult to get one's head around the bare-faced gall of this man. It was only a few weeks ago that he was claiming that the gargantuan public debt he's stoked up, spiralling out of control, was not a problem ("best placed to weather the storm" - remember that?). Mind you, it was only a few years ago that this idiot was still boasting that he'd abolished boom and bust (see video). Whatever the dishonesty - or lunacy - of his economic narrative (I think everyone now knows who really caused this crisis by wrecking banking regulation, deficit spending in a boom-bubble, 60%+ public sector debt and soaring, and racking up what will soon be a 12.5%+ structural deficit - which has nothing to do with the recession), this is particularly desperate stuff even for him.

As Iain Dale points out, the fire sale just about covers August (borrowing: a staggering £16.1Bn), but what about September? It's hardly going to be any better and there is precious little left to sell. What is more, and why this is so desperate, is that these sales for that very reason are going to be a disaster. The market will know the kind of pressure the Treasury is under to raise capital and so potential buyers will beat down the values massively. The idea that these assets (the Dartford tunnel, for Pete's sake) will raise anything like £16Bn is highly debatable.

Whatever the ins and outs of the economic technicalities of this new policy-on-the-hoof, there are a few other points to make. One is that we all know why Brown is really doing this, it's so he and his perennial henchmen Balls and Byrne can somehow outmaneuvre the hated Tories. This isn't about managing the deficit - the only way to do that is to slash public spending (CUTS, Gordon!) - it's about looking tough and giving the impression that this government - but Brown in particular - have actually got a clue and a grip. That's why I think it's significant that Brown made these announcements and not Darling. I very much doubt that Darling had much to do with them: there's little evidence as yet that he did. I wonder how he feels about that...

The second point to make is that, of course, this won't work. When the next round of government bond sales are due and yet another dollop of BofE printed money is required, the pound is going to go into freefall (again). We could be in for a credit downgrade, too (which means higher interest rates for everyone). Then the real pain begins as prices rise and the standard of living falls for everyone. Inflation is inevitable at this point and with manufacturing output collapsing again by a further 2.5% last quarter, there is little sign that any recovery is likely any time soon, no matter how much more "stimulus" is injected into the system and whatever the "rebound" idiots in this government would have us believe. Inflation makes this kind of activity pointless anyway because all you do is crush any potential growth under the dead weight of a devalued currency. At some point the balance tips and pump priming becomes ineffective. That time is now.

But that's basically Brown's narrative - all the way up to the election. He couldn't care less. He's trying to buy the popular vote - and he'll borrow anything, say anything and sell anything to that end. Simply, the man is mad and all those journalist-cum-economists with (some version of) Keynes on their brains do this country a terrible disservice by continuing to support him just because they don't much like the Tories. But they should know by now (well, everyone of them apart from Will Hutton who is as hatstand as Brown himself) that this is nothing to do with economics any more. This is all about Labour; this is all about Brown.

Brown will still lose the election. But so what? The damage will have been done. Not only will this generation be left with the smouldering ruins of an economy once again destroyed by an arrogant, incompetent and basically wicked Labour government, future generations will be too.