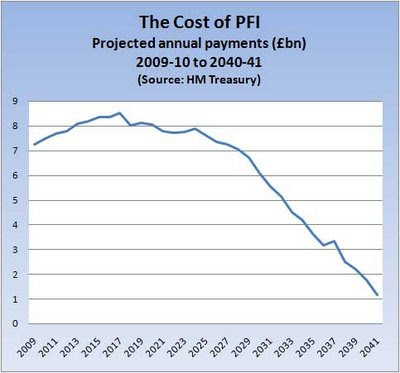 Source: BOM
Just a quick post to point out a scandal that has yet to break properly. Future Private Finance Initiative liabilities, according to the latest edition of Private Eye (I'll scan the article when I have a moment), are now estimated to stand at a truly terrifying £246 Billion. This is expensive (privately) borrowed money, not the cheap government kind, so the interest alone on this vast, hidden debt will be monstrous.

Any attempt to tackle the debt crisis by any future government is likely to be scuppered by these numbers, unless they are taken into account too and the pay-down rates recalculated accordingly. As the Eye says:

"As with any dodgy pyramid scheme, the day of reckoning of course eventually arrives. And now it has done, with cuts demanded from public service budgets already crippled under the weight of 640 PFI deals signed since the mid-1990s - most of them under the "Enron Chancellor", Gordon Brown." (Eye 1247, p.5)

Clearing up Brown's cataclysmic shambles will be no mean feat for any future government. But two things have to happen before the rebuilding can begin: 1) Brown and this criminally awful Labour regime must be eliminated - quickly, and 2) The next government must be absolutely honest about the scale of the problem.

My own view is that nothing short of a thorough, no-holds-barred "national audit" is required after number one has been achieved, in order that number two can be possible. Interesting times.
Posted by Jon Lishman at 10/17/2009 04:35:00 pm