Brown's "Cack-Handed Incompetence" : So It Begins... 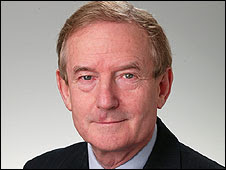 The countdown to Brown's exit, that is. Barely has the dust settled from the Czech cave-in over Lisbon and the torrent of Labour-sourced, anti-Brown briefings has begun. Already, for instance, this morning's Times has a front page village report that our useless and unwanted Prime Minister has acquired a stalking horse (stalking donkey more like, but I digress) in the form of Barry Sheerman. The report reveals just how deep the discontent within the Labour government now runs, just how desperately fragile Brown's authority has become and just how appalling his leadership of the PLP has been, particularly over the expenses issue.

It's worth a gander:

Barry Sheerman, the veteran MP and critic of the prime minister, was on the verge of standing for the position of chairman of Labour’s parliamentary party on what will be seen as a “Gordon must go” manifesto.

The chairman is regarded as the “shop steward” for backbench MPs. The incumbent is Tony Lloyd, a Brown loyalist.

MPs from all wings of the party offered Sheerman their support for his “stalking horse” bid, which could be formally announced this week. Alan Simpson, of the left-wing Campaign Group of MPs, said: “Gordon has found himself floating adrift from his colleagues. I think if Barry Sheerman stood, he might find a surprisingly high level of support.”

Another MP said: “If Barry wins, it would mean Gordon has lost his party. It would be hard to see how he could carry on.”

The fresh plotting came as it emerged that dozens of Labour MPs will openly defy the prime minister by refusing repayment demands from Sir Thomas Legg, the Commons expenses auditor.

Frank Field, the former welfare minister, became the most high-profile “refusenik” by announcing he would not pay back the £7,000 — mainly in “excess” cleaning costs — that Legg demanded. He is among 50 MPs querying demands from Legg.

Field, who when the expenses scandal broke had been described as a “saint” because of his low claims, spoke of his anger at being put in the “rogues’ gallery”. He was particularly angered by the way Legg introduced retrospective caps on claims for expenses such as gardening and cleaning which had previously been cleared by the Commons fees office.

“It’s like driving along at 25mph in a 30mph zone only to receive lots of tickets which say you should not have been driving over 20mph,” he said.

Amid signs of cabinet despair over Brown’s poor handling of the scandal, Harriet Harman, the deputy party leader, has let it be known that MPs found guilty of “technical” expenses breaches are unlikely to be forced to repay cash.

She is expected to be a candidate in any future leadership contest and Brownite loyalists privately believe she is undermining the prime minister by currying favour with disillusioned backbenchers.

The Legg audit has led to about half of all MPs being asked to pay back sums claimed for cleaning, gardening, furniture and second home mortgages. Many Labour MPs blame Brown personally for allowing the scandal to flare up again.

If Sheerman, respected chairman of the Commons education committee and who is on the moderate wing of the party, were to back away other rebels are ready to fill his place.

Jane Kennedy, the former farming minister, is understood to be considering standing on an anti-Brown ticket. The Liverpool Wavertree MP warned in June that Brown’s refusal to resign could seriously damage Labour.

Malcolm Wicks, a former minister who is now Brown’s energy envoy, delivered a thinly veiled attack on the prime minister’s leadership, saying the party needed to rediscover its “backbone”.

Nick Raynsford, the former local government minister, said Brown had displayed "cack-handed incompetence" over the expenses issue. He said: “It is not, in my view, certain that Gordon will lead us into the next election."

Many Labour MPs are braced for the publication next month of the official report by Sir Christopher Kelly, chairman of the committee on standards in public life, which will recommend radical reform of the expenses system. He is expected to say MPs should be forced to sell their second homes and to stop employing family members on the Commons payroll.

Brown’s handling of the expenses crisis will face further criticism tomorrow when Harman is expected to raise her concerns at a meeting of the Commons commission — the House’s governing body chaired by the Speaker.

By any standards, this is about as damning as things can get for Brown without an actual, direct challenge to his leadership. Now that Lisbon is done and dusted, itself an appalling crime against British democracy, there is nothing left to halt that direct challenge. It could come any day and I, for one, will welcome it with open arms no matter who we end up with in Brown's place (even the hated Harperson or the scheming Lord Peter Mandelson). That's how much I want Brown gone.

One thing is now certain, at least to me, my wish might well come true sooner than even I had predicted. The fraud, usurper and great ruiner of Britain could be gone before the end of this month!
Posted by Jon Lishman at 10/18/2009 12:06:00 am