Cameron Shows Brown How To Lead 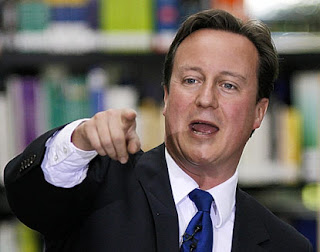 To the Daily Telegraph's credit, it has once again forced the broadcast media into doing its job and report on the biggest political scandal in this country probably ever. To David Cameron's credit, he has demonstrated the kind of leadership that the country is demanding, and shown Gordon Brown up for what he really is: a weak-willed ditherer whose authority has ebbed away in inverse proportion to his increasingly foul moods.

In firing David Wilshire, Cameron has been brave: Wilshire technically broke no rules and could have refused to go. Cameron was having none of it: Wilshire clearly failed the test of honour, that the old expenses system presupposed, by syphoning off public money into his bank account through his own company. (He failed a hell of a lot more "tests" than that! The test of morality and the law, for instance - but that's another matter.) His being forced out - and into making the announcement himself - reveals Cameron's authority in all its rude health. It also shows that Cameron has a very clear idea about what he expects from his MPs, now and in future. Everyone in the parliamentary Conservative party knows precisely where he stands, in spite of what Ann Widdecombe or sections of the media would have us believe. He might not benefit from his principled, iron stand in short-term polls, but come the election he will be bullet proof.

By contrast, Labour is shot-through with discontent, riddled with rebels and utterly rudderless. Brown's lack of authority, caused chiefly by his utter inability to lead (just how much more proof do people need!), is becoming clearer even to Labour supporters every day, regardless of the impression given, by the BBC in particular, to the contrary. On bank bonuses Brown blusters about global regulation, but nothing is done (and nothing should be); on expenses his own MPs petulantly challenge his high-pitched, unconvincing calls for them to pay the piper, and all he can do is give weird, vague interviews about "consigning the auld system to the pages of history."

Many millions of people, and many now of his own backbenchers, share precisely the same feeling about him.

"We've been scoring a lot of goals," says one Labour MP, "but putting the ball in the back of our own net!"