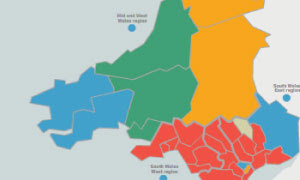 The Red Zone: about to disappear?
Apologies for my hen's teeth posting but managing the workload of a full time MA and trying to earn a crust with a bit of teaching can occasionally be somewhat time-consuming - and knackering to boot. It's been particularly hectic this week for some reason - and I have a tricky little test coming up too so there's no respite for a while.

Enough of that. I want to talk about the latest tasty morsal of polling news that indicates Wales could actually be about to cast off the Labour yoke - or near as damn it.

There's little to add to the Half Blood Welshman's excellent post on this devasting news for Welsh Labour. It's certainly worth a read. Here's an extract.

The Conservatives should be thrilled that they are doing so well in Wales - surprised, it has to be said, but thrilled. It doesn't make up for their continuing woes in Scotland, but it does something to counter to myth that they have become exclusively the party of the South of England. 50% more votes and four times as many seats - if they can pull it off - would be a major coup for Nick Bourne, Cheryl Gillan and David Cameron. From that point of view, this poll probably finally explodes the idea of Bourne standing aside before 2011, when he can perform an orderly handover on his terms.
Plaid Cymru will probably be disappointed (although Che tries to put a brave face on it). Their vote is up, but not by a lot. Ultimately, the aim of Plaid Cymru must surely have been to become the alternative to Labour as the leading party in Wales, and yet they are just barely in third place. Although they would pick up a gratifying clutch of seats, including the greatest prize in Ynys Mon, on these numbers, there will probably be whisperings that were they not tied to a tired and increasingly divided Labour government that they would be doing much, much better. They will also be dissatisfied that the avowedly Unionist message of the Conservatives - many of whose candidates and all of whose current MPs remain fiercely unitary in outlook, never mind Unionist - seems not to be a problem for a large number of voters, something that may be an issue given the upcoming report on the future of the Assembly (due on November 18th, but also foreshadowed according to rumour in the notorious Dr. Hain's speech on Thursday). You have to wonder where that will go in the present atmosphere.
The Liberal Democrats will be devastated. There is simply no way to dress up losing a third of your voters as anything other than a major blow. How that plays out in terms of seats remains a bit of a guess, but even so Kirsty Williams will not be happy. Hopefully this will be the spark they need to really galvanise a better campaign - such work as is going on looks to be poorly focussed to this outsider - to try and get some more publicity. The Liberal Democrats in the last 15 years have become big political players - they should not really just sit back and wait for the "oxygen of publicity" with an election campaign (I'm sure they don't intend to, but that's how it looks from here).
That leaves Labour. They lose a fifth of their votes - a third of their seats. The difference may be explained by the fact that they would be driven back on their Valleys heartlands, with a handful of outliers in Clwyd. This means that the last figure should also be of deep concern to the incoming leader, whoever that may be (my money is still on Hart). That is the others - on 7%, a near doubling of their previous attainment of 4%. If that is concentrated in a small handful of seats - say Caerphilly or Wrexham - there is the potential, to put it no more strongly than that, of another Blaenau Gwent style upset. Of course, we don't know exactly how it breaks down. It may be boosts for the BNP and UKIP, in which case it will likely prove irrelevant. Then again, it may not. The challenge facing the new leader remains huge, particularly if the (let's face it) badly-run contest, the divisions it has opened and the loss of Rhodri Morgan's personal presence cause the vote to sag further. Moreover, the idea that Wales is finally deserting Labour will be a crushing blow to morale - possibly on a national level as well as a local one.

That really is an excellent analysis. All I can say with certain knowledge is that in the towns of Carmarthenshire, particularly among my mother's generation, the notion of a world without Labour was once (and for many no-doubt still is) inconceivable. It is a political outcome that was - as I know from a conversation I had not so long ago with a pretty famous Welsh writer, for instance - to put it bluntly, completely off the mental radar of people here, many of whose parents were, so I am told, slightly to the political left of John Roose Williams.

The times they definitely are a-changin', however, as the poll unequivocably demonstrates. To cut a long story short, what they feel about this Labour government is what we all feel, for one reason or another: absolute betrayal.

The results of what is clearly the deep soul searching currently underway in Wales among, it seems, all sections of society are entirely unpredictable insofar as who, if Labour is about to be defeated, will fill their boots.
Posted by Jon Lishman at 10/27/2009 05:42:00 pm