A Peer Too Far 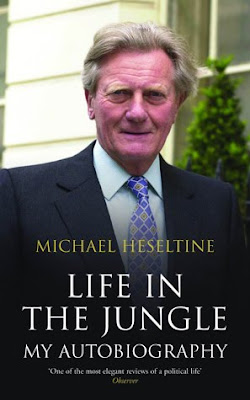 I've just got back from a nice trip to Tenby (lovely little town) only to be confronted by a vague rumour in the Spectator that Michael Heseltine might be about to make some sort of a comeback with a possible role offered to him in a Cameron cabinet. I've got two sets of opinions about this, one positive and one most definitely negative.

First, the positive. Tarzan is still a powerful, even commanding figure, untainted in the eyes of neutral and possibly left of centre voters by his years as a cabinet minister in Margaret Thatcher's government (his Westland tantrum cleansed him) and as Deputy to John Major (his side was never held responsible for the great Tory Euro split - that honour belonged, wrongly, to the "sceptics"). His experience and bullet proof, heavyweight 'elder statesman' image would cause severe problems for both Labour and the Liberal Democrats and could even attract a significant number of their voters, looking for an excuse to vote Conservative, to the party.

He's also a Welshman, but not a lot of people know that.

However, there are also negative points to make about the impact of his appointment on the balance of any future Conservative cabinet. The Spectator makes this point better than I ever could:

...if Heseltine returns to the Cabinet, there will be a problem of balance. As Tim Montgomerie notes, the presence of Clarke and Heseltine in the Cabinet will make a robust approach to Europe almost impossible. Plus, the right would be irritated if the left is over-represented in Cameron’s cabinet which it would be if Clarke, Heseltine, Andrew Lansley and Sir George Young were all in it. A Heseltine return would make it more likely that Peter Lilley, as a greybeard from the right of the party, would be offered a significant job by Cameron.

The only things I would add to this are that, in the first place, questions must be asked about the signals to referendum campaigners that this appointment would send. They are hardly encouraging. Also, by creating what would be a powerful clique of Europhile, big beast cabinet ministers around whom pro-federalists on the left of the party would rally, there is a risk that if they didn't get their own way, or felt that Cameron was being too sympathetic to the (reasonable) demands of the pro-sovereignty wing of the party - and 70% of the population - they might cause a lot of trouble. They've done it before.

For these reasons, and on balance, I feel quite strongly that the reactivation of this septuagenarian campaigner would be a bad idea. His best role would be as leader of the Lords or as an adviser of some description. His being offered a cabinet role would be a retrograde step.

What is more, given the number of unelected, appointed peer-ministers in the current government (including, of course, the most powerful politician in Britain, Lord Mandelson), we need more ministers from the Commons in a future Cameron cabinet, not fewer. Cameron must seek to rebalance British democracy in favour of the electorate.