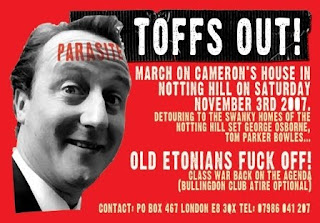 Aside from being transparently crap for ages, the BBC has always also been populated (some might say infested) by transparently left wing dickheads. Excuse me for being slightly scatological, but it really does get my gander because these dickheads splash out endlessly on their mindless propaganda habit with my money.

Now they're reviving that old, very old, rather dull and self-important London Weekend Television study in Edwardian class politics created by Jean Marsh (whom I have nothing against, even though she's a leftie too), Upstairs, Downstairs. Er, why?

Could it be the army of lefties at the Beeb finally sense that all is lost for their beloved Labour party so it's time to schedule some suitably revivalist claptrap about a class war that ended thirty years ago? Am I being paranoid? I don't think so. They've done it before, after all. Many times. They've got form. And this fits in perfectly with the "Tory toff" narrative the Left have been madly spinning from the day David Cameron decided to sacrifice a comfortable life and clear up the ruins of the British economy and society that will be left behind by the current crop of useless Labourist cretins. The timing couldn't be better - it's due to air mid-2010, presumably after Brown has finally been given the order of the boot.

You know what, I wouldn't care jot one what the Beeb proselytises about if it wasn't doing it all the bloody time and with my bloody money!

I think I know where the EU found its operating model now: the BBC. Pay us all your money - or else you go to jail - and then watch us do what we like with it. Nice work. Perhaps there's a TV series in that...

There's already been a book, after all. It was called Nineteen Eighty-Four.