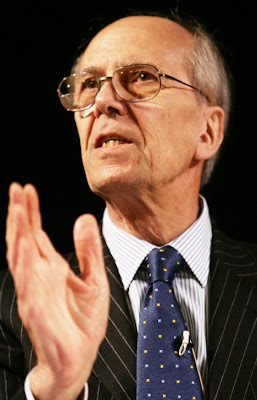 Lord Tebbit's second blog post cheered me up no end after a long day. For one thing, he's an absolute natural, writing with relaxed cogency and richness and engaging his many commenters - fans or otherwise - with authoritative charm. His chief idea - that tax thresholds which harm the poor so much and destroy any nascent inclination for self-improvement must be raised radically and swiftly - is one that resonates powerfully, too.

His introduction to this second post was brilliant, I thought:

Well, well. What an introduction to blogging. At first I thought it was quite unlike anything else I’d done in my political life, but after a while I realised that it is really rather like an old-fashioned political public meeting of the kind that has melted away since television took politics away from the grass roots in the constituencies and concentrated it into the TV studios. It is a pity we can’t have real-time heckling (yet?) but blogging has got life and guts.

Talk about putting it in a nutshell. He's made a observation that no one else has, as far as I know - that people want to be involved in politics, not just when there happens to be an election about, but all the time. And they always have, but while the MSM (TV and the modern DTP) certainly took politics to the masses, in a sense, it also stripped people of their ability, incentive - and right - to engage directly with their political representatives and servants. New Media is correcting that error and "Norm" has just revealed to me why I blog (I didn't realise, see. I thought it was just because I was angry!).

After thanking commenters on his previous post, he then turns to his main argument:

Then thank you, “michealp”. I think you answered my question: What is it that has changed our society for the worse? In your words, it is “because actions no longer have consequences”. Well, they do perhaps, but they are often perverse. It seems to me that our masters these days are willing to use a carrot and stick approach, but they almost always use the stick on the poor old donkey’s nose and inflict a terrible indignity on the beast with the carrot at its other end.

People are not daft. They do respond to incentives. If you let a burglar go free and jail the householder who defends his home and family by thrashing the burglar, the message is loud and clear and well understood.

And I hate to say it, but only one party leader seems to have grasped that, if you construct a system where unskilled people are worse off by taking a job than by staying on welfare, they remain trapped in poverty – and that is Nick Clegg. Lord knows, Frank Field and Iain Duncan Smith spelled it out in words and figures that only a simpleton could fail to understand, but the two main parties are unwilling to bite on the bullet and commit themseves to raising the income tax threshold from £6,475 to something like £10,000 or £12,000.

It is madness to claim that people so poor that they need welfare payments are at the same time sufficiently well-off to pay income tax. The effect is that people at the bottom of the stack living on benefits who try to get back into work are hit by 20 per cent tax, 11 per cent National Insurance and benefit losses that can add up to amost 100 pence in the pound. It is all very well for the better-off to complain about the disincentive effect of losing 50 per cent of every extra pound they earn, but what about the poor devil at the bottom of the stack who loses 90 per cent?

It neeed not cost that much. There would be a huge saving in benefits if we got those people back into work. We could redeploy all those people shuffling paper and money around the tax and benefit system to some useful work. And it would be easy enough to lower the 40 per cent threshold so that better-off people did not benefit from the increase in the basic rate threshold – so why don’t “the party of the workers” or “the party which believes in incentives” say they’ll do it? Why leave it to the Lib Dems, who are not going to have the power to do it?

It's a damn good question. I also note that he carefully (loyally) leaves deducing the obvious implications of it up to the reader: it's a pretty damning indictment of Conservative policymakers that this is not right at the very heart of the Tory manifesto, namely, a pledge to stop taxing people who are borderline impoverished, in UK terms, altogether. Another implication here is that he has dismissed Labour, New or Old, as a party capable of helping the poor, shout and jeer however much they like. They brand themselves the party of the poor, and then imprison them in a tax system designed to keep them down and reliant on the dishonest 'benevolence' of the Big State. Labour betrayed people just like Tebbit long ago. We should listen to him.

All in all, Lord Tebbit's blog seems to promise rich insight and entertainment for us commoners - and some serious and, perhaps, slightly unpalatable food for thought for David Cameron. (He should listen, too!)

Above all, however, the blog will (unintentionally) provide people from all over the political spectrum, but especially from the moderate-right end of it, with a daily reminder of just how formidable a politician Norman Tebbit is, and how much the Conservative party and the country still needs his tuned-in wisdom and his unwavering vision. On the strength of his writing so far, both of these signature Tebbit qualities appear to be undimmed by the years. How lucky we are.
Posted by Jon Lishman at 1/13/2010 06:02:00 pm