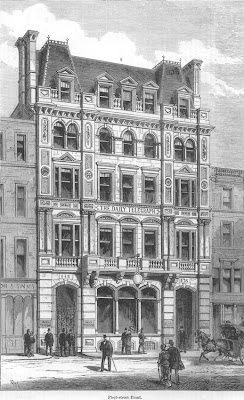 Just what the hell is wrong with the Daily Telegraph? Not satisfied with hiring easily the worst columnist in any newspaper in the form of Mary Drivell, taking a schizoid stance on the climate change scam (which itself smacks either of editorial opportunism or serious infighting - both bad signs), it has now gone into Tory-bashing overdrive. By hiring a sitting, partisan, left wing Labour MP in the form of the ghastly Martin Salter as a regular blogger, and by allowing green (in more ways than one), wet behind the ears lightweights like Will Heaven to attack Tory policies he doesn't even 'get' - and his fellow bloggers - whenever he feels like it (and he's not the only one), one can only conclude that some kind of major civil war has broken out in that newspaper's offices.
We all know that Will Lewis is a mate of Brown's and that Lewis's brother, Ivan (I think that's his name - don't really care, though), is Brown's accident-prone spokesman, but honestly, how much longer can this go on before people really do start voting with their feet. I gave up on it some years ago when they hired Lewis and then that venomous, sub-Toynbee Labour-groupie, Riddell. I suspect many others will feel they must follow suit before too long.
It's not just the Telegraph's political identity crisis that is frustrating readers, however. Once again today, we have evidence of its totally split personality on all things environmental, too, with its own bloggers regularly and flatly contradicting stories appearing in the same newspaper on the same day. Not sure I've ever seen anything quite like that before - and it is, at least to me, further evidence of that civil war I was talking about. On the one hand, you have a dutifully, totally uncritical article - (if not a tacitly supportive article) - about James Hansen's, one of the most discredited scientists in the world, implicated, as he is, in the Climategate scandal and a proven cooker of figures, latest lies about global warming, while on the other, with what has become slightly predictable haste, you have James Delingpole shooting down the article (and the man) in flames - again. The odd thing is, however, at no point does Delingpole mention the article in question which is something that I find extremely odd, if not quite disturbing.
The point is that while I accept that these examples taken in isolation do not amount to much, but taken together they reveal a worrying trend for that newspaper. It is completely at odds with itself and to say that it is drifting badly in terms of its journalistic cohesion and editorial coherence would be to put it very mildly. The fact is, it reads now like it's being put together every day by a bunch of warring factions, each desperately vying for the attention of its (falling) readership. None of this represents healthy signs for what was once a great, well-edited, confident, broad-church conservative, and usually Conservative, institution.
At the moment, the Telegraph comes across as being at the very least two-faced. Not even the Grauniad has that problem. Which just goes to show how very bad things have got at Buckingham Palace Road, at least to me. It really is time Will Lewis was fired and replaced with someone who isn't such an utterly divisive and horribly compromised figure. Someone sound, in other words (like the Telegraph used to be).
How about Matthew D'Ancona? I hear he's available - and he's a hundred times better than left wing Lewis will ever be.
Until the change comes, the crisis at the Daily Telegraph will only deepen. Sooner or later, something's gotta give.
Posted by Jon Lishman at 1/22/2010 05:42:00 pm