Mark Bathgate warns that Brown faces a major headache next month. The cost of Britain's debt is creeping up, especially after PIMCO decided to dump UK gilts, making it more and more expensive to fund, as Bathgate calls it neatly, Brown's "fiscal debauchery". As Bathgate says:

With inflation continuing to "surprise" on the upside, how long can the Bank of England keep justifying printing money? Now we learn that the Bank of England had printed £193.5 billion to finance government spending by the end of last week. So we are only four weeks to the next MPC meeting – but there is only £6.5 billion of new money left for them to pump out before they hit their £200 billion limit. Then we enter the scary territory I outlined in an earlier post. And Brown is still left needing around £15 billion of Gilt sales a month to finance his fiscal debauchery.

The Gilt market was fine while Brown's appointee's to the MPC were willing to keep the printing presses rolling to the tune of £1 billion a day through the summer. But...as inflation has started to rise quickly, the pace of money-printing and Gilt purchases has had to slow.

This has become a race for Brown, between the general election and a visit from the IMF. How long can he keep hosing borrowed money away, with no cogent plan to bring spending under control, or, in fact, no apparent acceptance even of the need to do so? The truth is, he can't face up to reality, but reality is about to bite. However, his head is currently buried deep in the snow. In what appears to be yet another classic Brownian displacement activity, he's taken personal control of the nation's dwindling grit supplies. Well, Gordon, this country and your diabolical premiership are on life support. And it's about to be switched off.

Seems to me this is an argument for a March election, but I reckon Brown is running another kind of race in his fevered imagination. He thinks that if he hangs on long enough, then the recovery will have begun and he will be able to take credit for it.
It won't matter to him that we were first in and last out (by a mile). 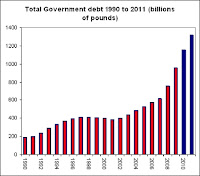 What he doesn't seem to realise is that the rest of the world, especially the parts having to fund his economic lunacy and political dishonesty, couldn't care two hoots about his political destiny, or the financial stability of Britain, for that matter. Why should they? But they could well be about to pull the plug, and yet the Bank of England has no choice. With inflation rising, adding to the strain on an economy mired in debt and still, officially, in recession, it will not, as Mark Bathgate suggests, be willing to go beyond the £200Bn funny money level. Next month will therefore be crunch time for Brown. He's gambling with the British economy and people's livelihoods just to save his own political skin.

But even if he thinks he's got away with it, with the start of a limited recovery (after the longest, deepest recession in the world, remember), he will not be forgiven for his behaviour and for the disastrous state he has left Britain in. That's the misjudgment he, and many of his jellyfish Labourist co-conspirators, have consistently failed to comprehend.

Give us the election so that we can explain it to them.

The market has already started to push up the cost of borrowing for the UK. It's risen by 0.6 percent over recent weeks. Despite having official rates over half a percent lower, UK borrowing costs are now 0.7 percent higher than those of Germany. I suspect the Gilt market will be very vulnerable in coming weeks.