Understatement of the Year (So Far) 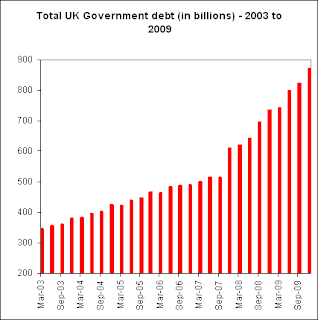 Nick "I know which side my bread is buttered" Robinson, BBC-Labour's tame political pundit, after the start of the UK's so-called economic recovery (0.1% to be adjusted is not exactly Darling's "trampoline" recovery now is it, especially after squillions in printed inflation-fuel has been chucked at it?), has just concluded on his hyper-moderated blog:

...some voters may note that we are still not securely out of the longest and deepest recession since the war and may conclude that the current custodians of the economy can no longer be trusted to finish the job.

The fact that Brown and his cohort of economic nincompoops and ne're-do-wells, whose now-legendary incompetence is only just about trumped by their compulsive mendacity, have managed to bankrupt the country in search of some sort of theoretical, artificially stimulated recovery that, as these figures show with devastating clarity, has utterly failed to materialise will not have gone unnoticed by the general public.

So, toenails, my old china, for "may conclude," read "decided a long time ago," and for "the current custodians of the economy," read "the Brownite, Labourist liars and wreckers," and for "can no longer be trusted to finish the job," read "are going to be lucky to get away with not being hanged en masse from the nearest tree, never mind an election defeat, for the cataclysmic economic harm they've managed to do to Britain, not to mention the desperate harm they've managed to do throughout British society, during their overlong period in office."

This is no time for understatement, you see!

But it is time for a Tory government. And if you read between Robinson's BBC-approved lines, even he knows that most sane people have known that for quite some time.
Posted by Jon Lishman at 1/26/2010 03:47:00 pm