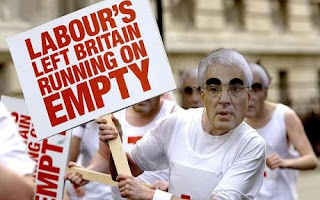 Tomorrow's DT will make further horrible reading for Brown and Darling (I dearly hope). According to one of their economics journos, Ed Conway, the head of one of Britain's leading fund managers, Neil Woodford, Darling's and Brown's inability to face up to the unsustainable scale of their spending and consequently gigantic debt levels - at least in peacetime - is now virtually certain to lead to a credit rating downgrade and, far worse, a subsequent debt spiral. Woodford is quoted as saying:

I would argue that there is a high probability... a decent chance that we will be downgraded, and it is a near certainty if we do not, in the wake of the next election, properly deal with the deficit. There are some major challenges here. If we do not take the medicine, there will inevitably be a downgrade. If we do, we have a chance of escaping a downgrade.

After the PIMCO shock, where their experts determined that there was an 80% probability of a downgrade from AAA and acted accordingly by dumping UK gilts, it seems this gathering economic storm is going to make the current arctic weather and subsequent national chaos look like a soft, Barbados beach on a warm day.

And the only party with a plan for getting us out of it with a coherent fiscal policy, designed to allow monetary policy to remain loose by avoiding the downgrade and subsequent, devastating interest rate rises and inflation, thus enabling a strengthening in any recovery, is the Conservative party. Philip Hammond proved that yesterday.

No wonder the Tories want an election right away. They're not bluffing - it's vital that we have a change of government because it really is the 11th hour for Britain's finances and economy.

Action must be taken - now!