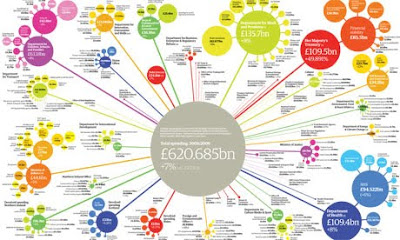 Guido, while analysing the impact of Darling/Mandelson's outflanking of Brown and neutering of Balls, reaches some very interesting conclusions about the implications for Cameron.

"Peter Mandelson’s speech on Wednesday was overshadowed by events, parts of it sounded more right-wing than anything Cameron has said in years...Mandelson sounded positively Thatcherite. Can you imagine Cameron delivering a speech written by Steve Hilton which souonded like that? Cameron’s opening speech of the year promised a new high-speed rail network and the creation of 100,000 apprenticeships. Dave sounded more like Gordon Brown than Maggie."

The fact is that now Brown is a lame duck Prime Minister, and Labour's left wing has effectively been silenced, Cameron has the wriggle room to turn right - at least on the economy. He can keep his guarantee on the NHS (though not without powerful caveats about massive savings through restructuring and the complete abolition of trainwreck IT, PFI disasters, for instance). But he can now launch an all-out assault on Social Security (which last year cost the UK taxpayer £136Bn [it'll be much worse this year - ed]) and public sector employment, especially in local government and NHS (mis)management.

Both of these have spiralled out of control under Labour. In these areas, the areas that really do count when it comes to saving the British economy from collapse, he can now be bold - but he must also be imaginative and make sure the banks are not let off the hook, too. Treasury expenditure has trebled since the bank bailouts and useless Brownite 'stimulus' packages. That can't go on.

The point is, now that the Labour government is being run by a Darling/Mandelson axis, I think Cameron will be bolder - and good luck to him. Maybe it'll get he likes of Fraser Nelson off his back (although I wouldn't hold my breath on that one - Nelson appears to have gone bonkers).
Posted by Jon Lishman at 1/09/2010 05:22:00 pm