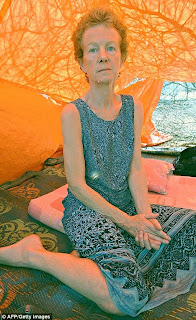 That's what would be sent by a government that had any idea about the concept of protecting the people of the country it seems to think it governs.

Going in hard would also have the happy outcome of not only rescuing two decent, hardworking, loyal, lifelong taxpayers, but would also solve the Somali pirate problem in short order (ask the Royal Navy).

But our pisspoor government is going to do nothing. Why? Who knows. It could be for any number of scary, mindless, thoughtless, couldn't-give-a-shit socialist reasons. It's possible that class is one of them (the Chandlers are from Tunbridge Wells). That's how evil this government is.

But saved Mr and Mrs Chandler must be, however. Or there will be hell to pay - and Labour better believe it.